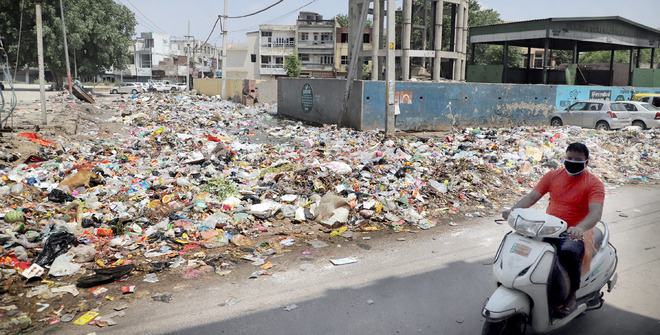 Owing to a dispute between the Delhi-based dozer company and the Municipal Corporation (MC) regarding clearance of dues, the Health and Sanitation Department of the MC has hired a city-based dozer company for lifting garbage from various waste dumping points.

As per official sources, the MC had reportedly failed to clear the dues worth around Rs 35 lakh of the Delhi-based company, following which workers of he company denied to lift garbage from various chowks of the city since Sunday.

One of the company executives on the condition of anonymity said the monthly payment was pending since August last year. However, the company was running its machines in the city even after the termination of its contract in April this year. Subsequently, after receiving no assurances from the civic body, the company stopped its dozers from lifting and levelling the garbage.

Chandan Grewal, leader, Sanitation Workers’ Union said workers were regularly dumping garbage but in the absence of dozers, lifting of the same could not be done.

Tonnes of scrap were lying unattended at several dump sites of the city. Heaps of garbage have been lying at various dumping points, including near Doaba Chowk, Plaza Chowk, Fish Market, BMC Chowk, Burlton Park and Partap Bagh.

Huge quantity of garbage at many places is a poor sight. Moreover, the dumping areas have become a breeding ground for stray animals, causing inconvenience to commuters and residents of living in nearby areas.

As the vehicular movement has also started after relaxations in the lockdown, commuters rued that the city was still the same and the foul smell emanating from the filth was unbearable.

Meanwhile, Mayor Jagdish Raja said: “Gaurav Gupta Company has been hired for regular lifting of garbage. Besides, the civic body is trying to find a way out to fulfil demands of the Sanitation Workers’ Union.” To get their demands fulfilled, the union workers have reportedly announced to intensify their protest in the coming days against the civic body.