As things inch towards normalcy, coaches feel players will require more hard work to get back on the track 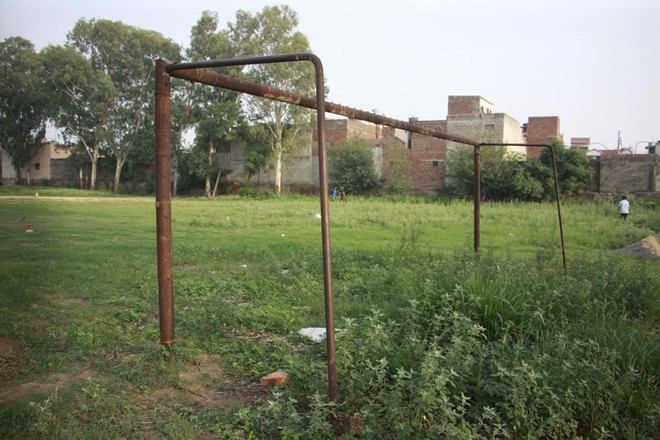 The football ground at Sports College in Jalandhar is missing the everyday hustle and bustle. Photo: Sarabjit Singh

Undeniably, the virus outbreak and the following lockdown have had consequences in the sporting world. The unprecedented times muffled all the ‘oohs and aahs’ witnessed in the stadiums as games across the globe shuttered. As time progressed, it took a toll on players’ fitness levels and many are still reeling from the effects as they strive to get back into the usual groove.

Considering the scenario here, the sports city of nation was also numbed to the core. The pandemic took all the charm away as the vacant grounds became a common sight, players caged at homes, respective tournaments got cancelled or postponed. Meanwhile, same scenes were running parallel nationally and overseas as well.

Locked in at home, confronted with ample of time and lack of actual training sessions coupled with fears of dwidling fitness levels, the players indulged in working out and training at home. Online sessions with coaches became the new hit and the only way to train. But somewhere in between, players did lose their steely side — or so the coaches feel as the bigger picture emerged after the unlocking phase. Though the high-profile players have somehow managed to cope, question mark hangs about the national-level players.

Gagan Ratti, a badminton coach at a college here, says his was one of the few stadiums that got permission to reopen. “But I have seen that the players have lost their strength. It will take some time to bounce back,” he adds.

As wrestling and boxing are contact games.The players aren’t able to do the technical training considered essential in these. The subtle nuances of technicalities in such games go a long way and in absence of partners it becomes almost impossible to grasp them. Though online sessions help to some extent but many things can’t be replicated on videos. Mandeep Sharma, an international coach from Jagjit Singh academy, says, “Since lockdown started, I have been sending in the videos of wrestling to the players so that they keep on practicing daily. And then the players also send in their videos of practicing at their homes.” However, online training seems to have taken over the method, “but some coaches have felt that it is of no use because of lack of discipline in some of the players.”

The income source of families of many players has stopped amid the pandemic, but that isn’t holding them back from practicing. The players belonging to underpriveleged sections have shown moxie and are single-minded regarding practice. They are eagerly awaiting the resumption. Many don’t even have proper equipment such as mats at their home and training on the ‘katcha’ floor.

Having lived in poverty for much of their lives, the budding players say that the fear of virus didn’t bar their spirits. They feel the current times are just another match of their lives.

Sharmila, a Judoka, who had won a bronze medal in judo in the Khelo India Youth Games, a national-level competiton, organised by the Ministry of Youth Affairs and Sports, lives in one room rented house in Jalandhar. Although, she is not practicing but is upbeat and would resume as the school starts. “I study for most of the day and not practicing yet but would start again when the school starts,” the 15-year-old says. Her mother used to work as a domestic help, has no work now. She is the only bread earner in the family.

Also, because of no proper work, such promising players don’t get a special diet. And for that to happen, the parents have to cut on their expenses.

After the pandemic, everything had stopped. The sportspersons suffered a lot. Already a year has been wasted and it will require another year for them to get back in form. The road ahead is not smooth for the players. Rajni Bhalla, Women wrestling coach

The lockdown was imposed suddenly and I couldn’t even buy any equipment for my training. Practising at home is not easy at all. To maintain weight is another challenge these days. Though I do exercise at home, it cannot match that level. Ashutosh Bhagat, National-level boxer

Boxing requires direct eye to eye and physical contact, but amid this situation, it is not possible to practise without a partner. Also, the majority of players don’t have equipment like punching bags, skipping rope, etc, in their homes. Arihant Kumar, a Boxing coach

On normal days, we don’t get to do power exercises to strengthen ourselves. But I am doing such exercises as give me more strength amid the lockdown. However, being a wrestler, I miss a partner and that training with a partner has actually been affected. Harpreet Sandhu, Wrestler

The outbreak has certainly changed the scenario of sports. However, I am ensuring that I always keep in touch with them and provide them online training, but, it is not that easy to have that level of communication during online training too. Paramjit Singh, Athletics coach

There were several promising players who were hardworking, but had troubles because of the pandemic at their homes. I made sure that I provided them all help. However, providing online training is not that easy. Sharandeep Kaur, Physical education teacher

It will take another two to three months for the players to regain what they lost in the last three months during the lockdown. I am witnessing changes among the players, they will require harder training now and more hard work will be needed. Gagan Ratti, Badminton coach