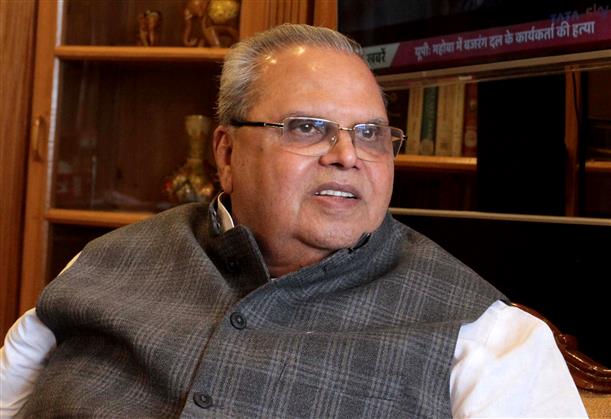 Addressing a gathering at an event held at Beas Pind here, to honour the farmers who died during the Kisan Andolan, Malik said the central government and the Prime Minister initially took the farmers protests lightly.

He said the government finally withdrew the farm laws but issues like guaranteed MSP and withdrawal of court cases still need to be resolved.Malik also said he would take up the issue of the release of Sikh prisoners with the Prime Minister. Malik said the fight of farmers wasn’t over yet and there was needfor farmers to get together on remaining demands.

Addressing the gathering, Malik said, “Many friends advised me to keep quiet (on farmers’ issues and Red Fort fiasco) if I wanted to be Vice President or President. But I said I deem no position big enough to make me go silent. I tell you honestly - my pen is always ready to sign resignation. When, after I saw that farmers of Punjab and Haryana remained at the borders four months of farm protests, I took up the issue with the PM. I asked him to talk to them on the issue and send them home. But he took it lightly.”

Malik added, “Later, the PM talked to farmers and also apologised on the issue. I also said this should have been done before. 700 farmers’ death shouldn’t have been ignored.”

Malik further said, “But still, the government is not being honest. Its intentions for farmers are not right. It hasn’t done anything on MSP, nor has it withdrawn cases against farmers or those who climbed atop the Red Fort. I want to exhort you all that farmers still have a long battle to fight and I will be with you for it.”

Malik also said he would personally take up the issue of the release of Sikh prisoners.

He said, “Sikhs who have completed their prison terms should be freed. I will personally take up their issue with the PM and if need be at the Supreme Court too I will extend help to them.”