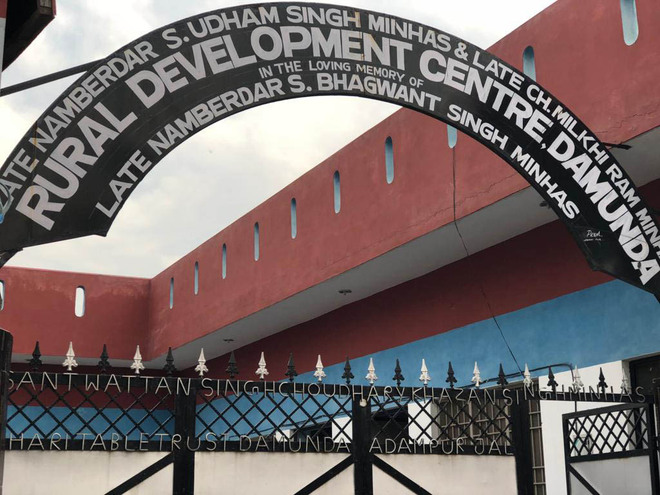 Minhas has converted his ancestral house at Damunda village in Adampur into a rural skill development centre.

Jatinder Jay Minhas was 23 when he left Damunda village — his native place — in Adampur and moved to Canada.

Now 60, he makes sure he visits his village at least 3-4 times every year to support social activities back home.

Having returned just four days ago, his first stopover was at Tikri border, where he donated 3,000 shawls to farmers. Calling in specialists and staff from Lions Eye Hospital that he is financially supporting in Adampur, he also organised an eye camp for farmers before he finally came back home last evening. From morning till evening, he remained busy attending a host of Lohri celebrations at a school and Baba Bhag Singh University, Adampur, which, too, get monetary support from him.

Though Minhas is settled in Richmond, he is running a construction business and a film production company in Surrey.

“I have two daughters, both of whom are now handling my business. I love to be here and enjoy spending time here. This time, I have come with a target to get the work of setting up a multi-purpose sports stadium in my village. I have a dream to set up a stadium in the memory of two Saragarhi martyrs — Gurmukh Singh Minhas and Jeewan Singh Minhas —who were engaged in that battle and were from my village.”

While sharing his plan he said: “I have already arranged for 2 acre land and we are in the process of adding one more acre, so that we can have grounds for soccer, basketball and volleyball. I also intend to set up a gym, changing room, good washrooms and all other required facilities. I have already engaged an architect, but we are yet to finalise the plan. I hope the work will start at the site by mid-2021 and the most interesting aspect of it is that I want to give the stadium the shape of a fort.”

Minhas said most of his activities in Adampur have been around improving health and education facilities for his people here. “When I moved to Canada in 1983, I realised that both these facilities are government-sponsored there. It took me sometime to establish myself there and when I did, I started returning in the ’90s and began extending some donations on each visit. In 2005, I supported in the setting up of Sant Baba Bhag Singh Engineering College here, which 10 years later got upgraded as a university. I have remained involved in this project closely. I have also contributed towards setting up a bridge near Padhiana village.”

About his works on the health front, he said: “With five more NRIs, I am associated with the Guru Nanak Mission Hospital at Mithapur village. Since 2010, I am also associated with Lions Eye Hospital. They were conducting 150 free eye surgeries annually. For the past 10 years, I am organising an annual eye camp for them which gets 3,000 poor patients in the OPD. We offer them free medicines, spectacles etc. We also conduct free 800-900 cataract surgeries. I also got an operation theatre set up here, which I opened from Canadian High Commissioner, who especially came here on my invite. I spent Rs22 lakh on re-laying a road in front of the hospital.”

He said: “We have even converted our ancestral house into a training centre for stitching and computer classes. I set it up in 2015 in the memory of my father, who passed away the same year. He had expressed his desire that our house should be put to some useful work for the betterment of villagers. In 2013, I also spent Rs22 lakh on setting up two blocks of a government primary school in the village with local Akali MLA Pawan Tinu. Besides, I have also been contributing for laying sewer system in the village.”