Jalandhar: ‘HMV- A nursery of Olympians’ 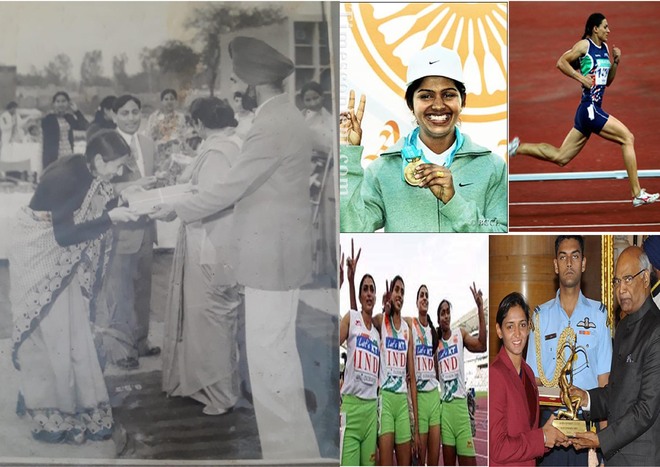 Jalandhar: The name of Hans Raj Mahila Maha Vidyalaya stands out in the field of sports and it carries a saga of a number of success stories of Olympians who embellish its glorious journey of excellence. Aptly acknowledged as a 'Nursery of Olympians', it has nurtured and groomed players of international repute. HMV feels proud of Sunita Rani, a famed athlete and recipient of Padma Shree and Arjuna Award and Manjit Kaur who holds the current national record in 400 meter and qualified for 2004 Athens Olympics. Arjuna Awardee cricketer Harmanpreet, Maharaja Ranjit Singh Awardee athlete Rajwinder Kaur, Strong woman of India Seema Thapar, Mayuri Dhanraj, Rajeshwari, Joyshree, Irom Matouleibu, Sloni, Pritpal and Surjit Kaur Hockey Olympians have all won accolades in international sports and brought laurels to its alma mater. Renowed Olympian Milkha Singh also graced the institution with his visit on sports meet and appreciated the efforts of HMV. Principal Ajay Sareen who holds the honoured position of the president of Hockey Punjab (women wing) was also honoured by the association for her contribution in the field of women sports. She congratulated the HMV family on the occasion of World Olympic Day.

In a series of activities held to commemorate the 400th Prakash Purb of Guru Teg Bahadur, an inter-department online sketching and slogan writing competition was held at Guru Nanak Dev University Regional Campus at Ladhewali. Students from various departments of the campus participated enthusiastically in the competition and showcased their creativity. The theme of the competition was on the life and teachings of the ninth Sikh Guru. The slogans were mainly taken from the Bani of the Guru. Nishant, Swamjit Kaur and Harman from the Department of Laws, bagged the first, second and third positions, respectively. Amandeep Kaur from the same department was given a consolation prize. Jyoteesh Malhotra, Associate Dean of the Campus, said the teachings of the Guru are relevant even in the modern times and students should learn from his life and teachings.

Kapurthala: In a webinar organised by the Public Administration Department of Hindu Kanya College on ‘Women empowerment at grassroot level’, Madhya Pradesh Institute of Social Sciences Research Director Dr Yatinder Singh Sisodia put light on various challenges and options relating to women empowerment. Addressing the national-level webinar which was attended by over 200 participants, Dr Sisodia said empowered women can bring noticeable change in society and several studies across the country have substantiated this fact. In the areas, which are governed by women, the social vices are under control. He said women should be given free hand to take decisions and society should back their decisions. Dr Sisodia exhorted all women to participate actively in politics and refrain from becoming name-sake representatives only. He put light on different provisions of the Constitution which ensure women empowerment and highlighted the reasons behind the shortcomings.

Kanya Maha Vidyalaya observed International Olympic Day with much fervour and enthusiasm. The celebrations were organised by the Department of Physical Education. During the celebrations, KMVites expressed their love for sports and came up with wonderful presentations to convey the significance of sports in everybody’s life. During the celebration, students conveyed their message by designing unique posters and slogans and they also shared video messages depicting the importance of physical fitness. Principal Prof. (Dr.) Atima Sharma Dwivedi averred that sports is an essential part of our life as it helps in maintaining the physical, mental and spiritual health of a person and therefore, KMV salutes all the sports person for their relentless dedication on this very special day. She averred that players at KMV are provided many facilities which include free education, hostel, mess and transport facilities. They avail a lot from state of the art infrastructure comprising gymnasium, health club, swimming pool and sprawling playgrounds. Principal lauded the efforts of Department of Physical Education for successfully organising the celebrations. TNS