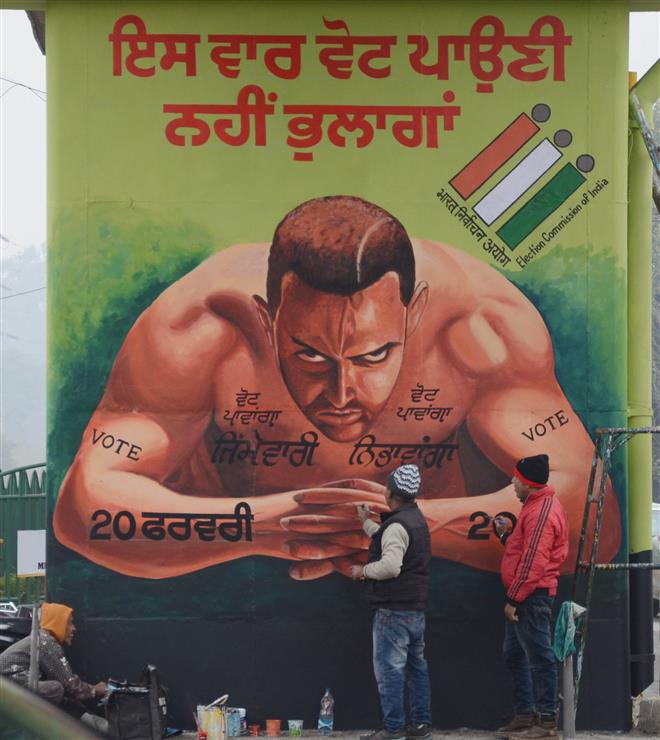 If the parties are using hoardings, the district election officers, too, have plans to organise its Systematic Voters’ Education and Electoral Participation (SVEEP) activities to motivate voters, especially the younger lot. For this, the district administration has come up with an initiative kind of graffiti to inspire voters to vote. Pillars under the BMC flyover were on Monday painted with the message to cast vote on February 20. The paintings have featured Bollywood star and EC brand ambassador Aamir Khan as seen in his film ‘Ghajini’ in which he was shown as a forgetful person. The painting tells everyone not to be forgetful and remember to cast the vote. Is vaar vote pauni nahin bhulanga is the message written in Punjabi.

Poll 2022 As the political scene hots up ahead of Assembly election in the state, Tribune reporter Deepkamal Kaur dissects fresh hoardings, which are being installed on the legalised unipoles and have become the talk of the town

Deputy Commissioner-cum-District Election Officer Ghanshyam Thori said the administration had selected 30 sites at main locations in the city, where different designs of graffiti would be illustrated.

The Deputy Commissioner pointed out that these sites would promote the messages tuhadi vote, tuhadi zimmewari (your vote, your responsibility), vote paun layee vadiye asin, rukiye nahi, thakkiye nahi (we proceed to cast vote, don’t stop, don’t get tired), voters helpline 1950 to provide all necessary information to voters, tuhadi vote, tuhada haq (your vote, your right) and vote paa ke apni zindagi de atharvein varhe da jashan manao (celebrate 18 years of your age by casting your vote) – a message for 27,042 first time voters. The other slogans would highlight ‘No note for vote’, ‘Vote for a better India’, ‘Your vote your voice’, etc.