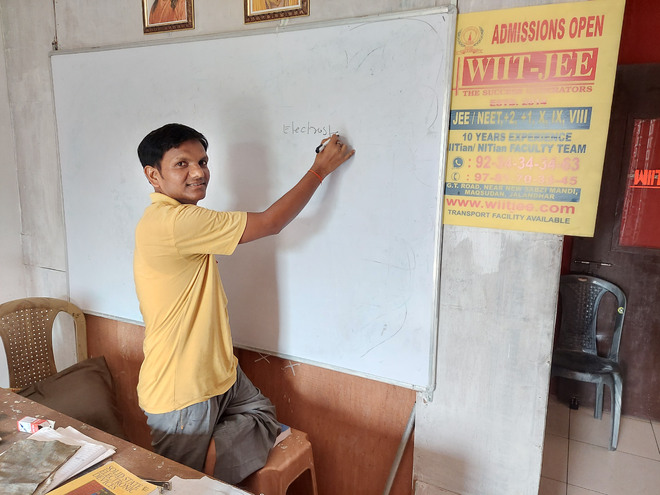 A native of Jharkhand, Shiv Kumar returned to Jalandhar in 2015 and opened his own coaching centre WIIT-JEE (Way to IIT) near Maqsudan.

Lockdown pushed many people to extreme poverty and brought with it many unprecedented challenges amid pandemic. However, what remained the only constant amid these gloomy times was the ‘hope’ to bring life back on track.

Shiv Kumar, a 32-year-old physically disabled educationist, is doing his bit to turn the tide in his favour. After graduating from the National Institute of Technology (NIT) Jalandhar, in 2012, little did he know that his disability would be such a major disadvantage for him in bagging a job in any company though he had secured a good All-India Rank in the entrance exam.

Thereafter, he started giving tuitions to engineering aspirants and also joined a private coaching centre in Kota to teach students in order to stay afloat.

After gaining some experience, Shiv, a native of Jharkhand, returned to Jalandhar in 2015, to start afresh. Subsequently, he opened his own coaching centre WIIT-JEE (Way to IIT) near Maqsudan. While his family members stay back in Jharkhand, he says the only support he has is his mental strength and his elbow crutch. His only aim is to prepare students to clear entrance exams for engineering and medical colleges.

However, things went topsy-turvy after the outbreak of Covid. “In these four years, I never faced such hard times. Most of the students have left the coaching centre. While we also switched gears but offline classes were my USP. We are now finding it hard to keep the coaching centre running. But, teaching is my only passion which I developed over the years, hence I will continue to teach,” added Shiv, who is now struggling to get students. Strong-willed Shiv doesn’t consider his disability (an undergrown leg, which couldn’t be cured medically) to be an obstacle in fulfilling his dreams.

Shiv gave employment to others

A native of Jharkhand, Shiv Kumar returned to Jalandhar in 2015 and opened his own coaching centre WIIT-JEE (Way to IIT) near Maqsudan. He managed to become independent and even give job to others. His only aim is to prepare students to clear entrance exams after Class XII.