Hoshiarpur: 3 of family killed as truck rams into car : The Tribune India 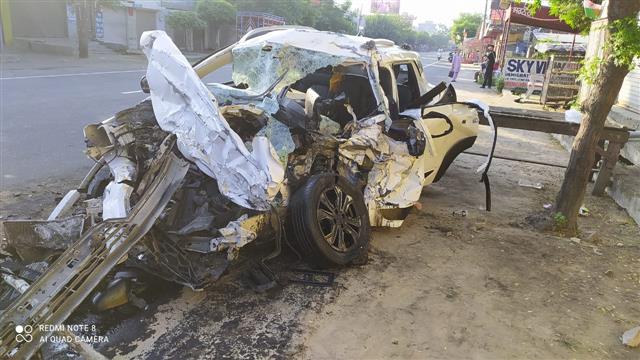 The truck driver, who was in a drunken condition, hit the car on the other side of the road.

Three of a family were killed and four others injured in a collision between two vehicles at Adda Satnore on the Chandigarh-Hoshiarpur main road late last night. The truck driver, who was in a drunken condition, hit the car on the other side of the road.

The family was on its way to visit their relatives in Hoshiarpur from Pinjore, Haryana, at 11 pm on Friday. When they reached Satnour, at around midnight, their car collided with a truck coming from the Mahilpur side. In the accident, Ravinder Singh, 40, his wife Divya Rani, 32, and their one-year-old son Jaivik died. Divya and Jaivik died on the spot, while Ravinder died during treatment at the Civil Hospital, Garhshankar.

Besides, Harjit Kaur, 54, Neetu, 30, Saurav, 33, and six-year-old Sachnoor Singh, son of Ravinder Singh, were admitted to the Civil Hospital in a serious condition. SMO Dr Raman Kumar said the injured were further referred to the PGI after first aid.

SHO Karnail Singh said: “The truck driver was in a drunken state. He was taken into custody after getting his medical done. The truck went to the wrong side of the road and rammed into the car. After taking the statement of the injured, a case will be registered accordingly.”