With the second highway blockade in three days, there seems to be no end to commuters’ ordeal on roads, but who cares? 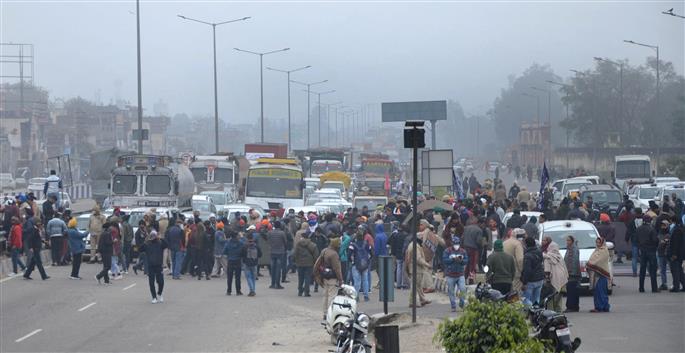 There seems to be no end to commuters’ woes in the city. It was for the second time in the last three days that city residents witnessed a major traffic jam on the national highway near Rama Mandi.

As members of several Dalit organisations blocked the Jalandhar-Amritsar national highway near Rama Mandi here today for nearly an hour, a large number of commuters were left helpless, waiting for the protesters to end their demonstration.

Though the protesters gave a call to block the highway from 10 am to 4 pm, the police managed to stop them till 1pm and they were protesting on the service lane. However, at 1 pm, the protestors squatted on the main highway stretch, blocking vehicular traffic. They kept protesting for nearly 30-40 minutes, which, meanwhile, resulted in a traffic jam up to four to 5 km on either side of the highway.

Notably, the Dalit organisations blocked the highway against the scheduling of Punjab Assembly elections on February 14. The members said the birth anniversary of Guru Ravidas falls on February 16 and to mark the occasion, lakhs of devotees visit the Guru Ravidas Janma Asthan in Varanasi, Uttar Pradesh. Thus, they won’t be able to participate in the voting and were demanding rescheduling of the poll date.

When asked why they decided to block the highway for the demand, one of the protesters said a number of demand letters were submitted to the DC and even CM Channi and politicians of other parties have written to the Election Commission, but nothing was happening. So they were left with no other option.

“We understand such protests render inconvenience to commuters, but it was about our voting rights. Lakhs of people from Doaba region are going to Banaras, their bookings are done, and they’ll be returning on February 16. It was important for us that the polling dates are rescheduled, so we can cast our votes. Even commuters were supporting our demand,” Jatin, a protester, said.

Similarly on Saturday, agitated over the repeated postponement of the written exam for Army recruitment, hundreds of youths from the district blocked the highway showing their resentment against the Central Government. Even then, a massive traffic jam was witnessed and commuters were stranded for several hours.

Meanwhile, an FIR against protesting organisations under Sections 283 (obstruction of public way) and 188 (violating government’s orders) of the Indian Penal Code has been registered. “We tried to pacify the protesters but they ultimately switched to the highway from the service lane. It was after EC’s decision to change the poll date was announced, the protestors called off their protest,” said SHO Rama Mandi, Jatinder Singh.

“We totally understand the demands of the protestors, but they should also understand that blocking roads does not serve any purpose, it simply harasses the common public. It was the first day of the week, many had their important meetings scheduled, some people were visiting to see their ailing parents, and others have some functions to attend, but it was all ruined as we were stuck in traffic,” said Vimal Pratap, a commuter. “The police, administration and even the government have failed to stop these protests. They simply allow everyone to block the highway anytime.

From farmers protests to teachers’ protests, and then that police recruitment scam and after that Army recruitment protest, what’s going on here, why the government doesn’t designate a protest site in the city, till when we have to suffer like this,” said Sakshi Talwar, a youngster.