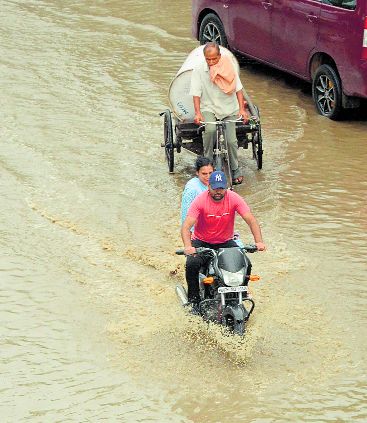 Commuters make their way through a waterlogged road after a downpour in Jalandhar on Saturday. Photo: Sarabjit Singh

The city and its adjoining areas on Saturday received moderate to heavy rain, which started in the morning and continued till evening. Persistent rainfall disrupted normal life in the district, causing waterlogging and traffic snarls. It also exposed the civic body’s lack of preparedness.

Several low-lying areas, posh localities and the majority of roads were flooded with water, giving a tough time to residents. People were seen wading through waterlogged roads with many pushing their bikes and others flushing out rainwater from their localities and shops.

The waterlogged roads near Lamma Pind Chowk, Damoria Underbridge, Transport Nagar, 66 ft. road, Wadala Chowk, Pathankot Bypass Chowk, Laddhewali Road and others made it difficult for commuters to cross the roads. The roads were scattered with potholes and flowing garbage also made it difficult for rickshaw pullers and auto operators to move their vehicles.

Residential areas in Preet Nagar and Sodal remained inundated with rainwater throughout the day. Commuters going from the bus stand and the railway station also faced inconvenience as the approach roads remained muddy and inundated. Long traffic jams at prominent chowks due to rain troubled residents. In most of the under-construction roads, concrete came off.

Local residents blamed the municipal corporation and expressed their anger on social media. “Waterlogging on roads and inundated streets is not a new affair during rain. The administration also needs to find a solution to choked sewers,” said Mohit, a resident.

In most areas, including government buildings, power cuts added to the woes. As per the local PSPCL offices, hundreds of complaints were received throughout the day.

The weatherman has forecast more rain for the next three days. The daily temperature hovered between 20-30°C.