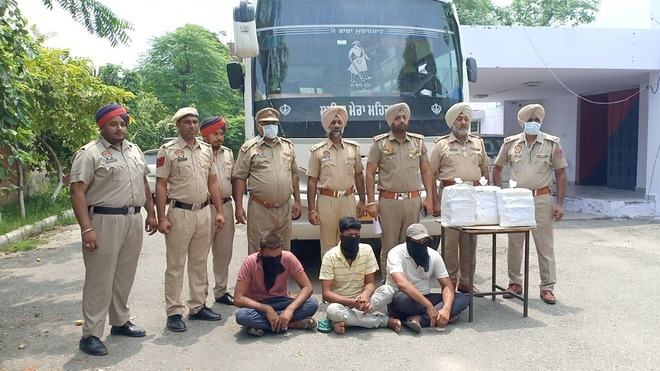 The accused in the police custody on Monday. Tribune Photo

The Kapurthala police have busted an international drug racket spread across India and Nepal on Monday. Cops arrested three persons and seized 15-kg ganja from their possession.

Senior Superintendent of Police (SSP) Harkamalpreet Singh Khakh said several teams were formed under the supervision Phagwara SP Sarbjeet Singh Bahia along with DSP Paramjit Singh to keep a vigil on the activities of anti-social elements.

The SSP said acting on tip-off, the police party led by the CIA Staff, Inspector, Sikander Singh and ASI Paramjit Singh stopped a private bus near Phagwara bypass. He said cops seized 15-kg ganja hidden in plastic packets from the accused who were travelling in the bus.

Khakh said during preliminary investigation, it has come to fore that the consignment was being smuggled from Nepal and the trio had links with peddlers in Nepal and Bihar. He said the peddlers will be produced before the court today.