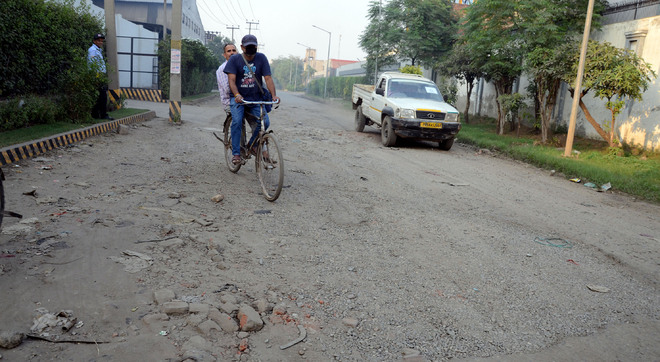 Potholes in the middle of roads have made travelling riskier for one and all in the Focal Point area.

All roads in the Focal Point area, which is home to several big industrial units, are in a state of utter neglect.

Industrial unit owners say it so embarrassing to take parties or clients from other states and abroad to their factories because of the poor condition of roads. Potholes in the middle of roads had made travelling riskier for them. Even pedestrians found it difficult to reach their workplace. Water remained stagnated in huge potholes that keep appearing and enlarging every day. Sand had accumulated on their margins, giving the roads a look of desert. “It is a nightmare to travel on these bumpy roads, especially when it rains. We have spent crores in establishing our units. Does the government expect us to shell out money to improve the road infrastructure too? Focal Point is the place where dealings in crores take place every day. Why is the government ignoring its upkeep. No government official has ever visited here. They are just trying to ignore the issue,” said an industrialist.

Another industrial unit owner said they now preferred to take their clients to some hotel to save themselves from humiliation. Sources said with the efforts of factory owners, some roads in the area were repaired, but those built 20 years ago were crying for attention.

Balram Kapur, owner of an auto part manufacturing unit, said the situation was very pathetic. “It is the duty of the government to ensure proper road infrastructure. But who pays heed? Nobody. We are tired of repeating one thing several times.” Recently, some roads were rebuilt by spending an amount of Rs 7 crore after they raised the issue on several occasions.