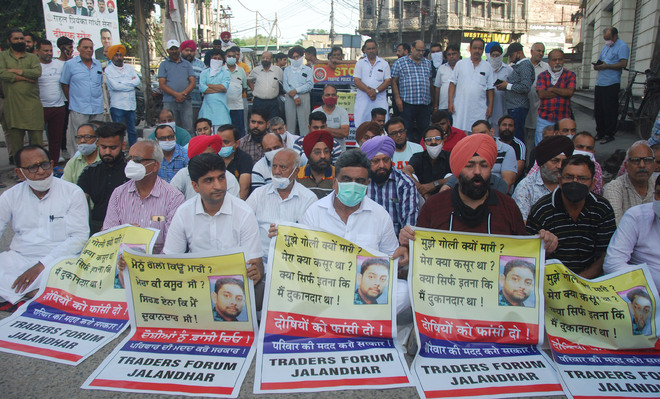 Shopkeepers under the banner of the Traders’ Forum during a protest in Jalandhar on Wednesday. photo: Sarabjit singh

The Commissionerate Police (CP) on Wednesday arrested Deepak, a resident of Haripur village, who is reportedly one of the persons involved in the murder of Sodal Road-based kariyana store owner Sachin Jain. Besides, the police have identified the third accused as Sahil of Raj Nagar locality.

Deputy Commissioner of Police Gurmeet Singh said the two accused were identified by the police within 24 hours of the incident and one of them had now been arrested. The accused were identified as Arshpreet Singh, alias Wadda Preet, of Shaheed Babu Labh Singh Nagar, Deepak, a resident of Haripur village under the Adampur police station, and Sahil of Raj Nagar locality.

The DCP further stated that as per reports, all three accused with a motive to snatch money from the karyana store owner had a scuffle with him and one of the accused fired a shot at Sachin Jain. Following which, he succumbed to the gunshot on Tuesday morning.

The police remand of Deepak would be sought by the police to complete the investigation in this case.

Meanwhile, shopkeepers of the area under the banner of the Traders’ Forum, Jalandhar, on Wednesday evening organised a sit-in near Bhagat Singh Chowk demanding justice for Sachin Jain. They also appealed to the government to provide help to the bereaved family.

Sanjay Sehgal, a city resident, submitted a complaint via Twitter to the National Human Rights Commission, the National Medical Commission, the Indian Medical Association, the Commissionerate Police, Jalandhar, and the Punjab State Commission for Minorities against all four private super specialty hospitals in the city which refused to admit Sachin at a time when he urgently needed medical care.

“Sachin Jain belonged to the Jain community and the state government has given minority status to the community, so the matter is brought to the notice of the Punjab State Commission for Minorities to take cognizance of the matter,” added Sehgal.