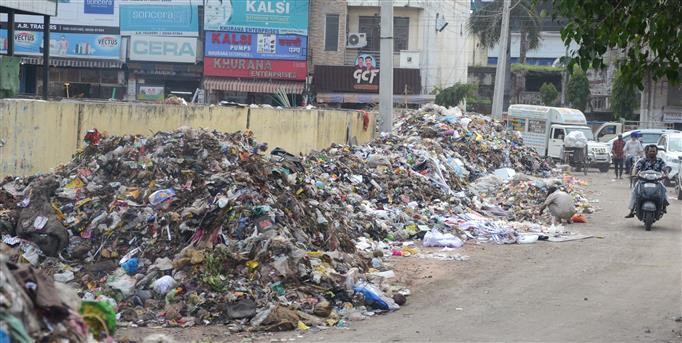 A company was given the contract to lift the waste from some dump sites and the remaining ones were looked after by the civic body itself. Since the contract expired, there is filth all around. The process of lifting waste gets obstructed due to one reason or another.

Mosquitoes, flies and unbearable stench welcome the residents in various parts owing to poor management of the waste.

Heaps of garbage can be seen in Chugitti bypass, Model Town dump and Pratap Bagh areas. One could spot mounds of waste at almost every roadside.

Two days ago, safai karamcharis had picked a fight with some shopkeepers after which they had stopped lifting waste. MC Commissioner Devinder Singh called them on Friday and asked them to start the work as city was in bad condition after which the lifting was started.

Two days ago, safai karamcharis had picked a fight with some shopkeepers after which they had stopped lifting waste. MC Commissioner Devinder Singh called them today and asked them to start the work as city was in bad condition after which the lifting was started.

Megha, a teacher from Surya Enclave area, said she had never seen her city clean. “Every second day there is some problem. The MC cannot even provide us a clean environment to live in, what else we can expect from them. This is the least they can do, but they are not even giving us basic amenities.”

Rakesh Chawla, a daily commuter, said, “I do not know why cleanliness is not a priority of the MC. Do not they know that this filth, smell and mosquitoes lead to the outbreak of diseases. I hope they will wake up from their deep slumber and act.”

Shri Krishan Sharma, Assistant Health Officer, MC, said some of the dump sites were managed by the contractor, which is why the lifting was getting affected. “Recently when Local Bodies Minister Dr Inderbir Nijjar visited the city, the work had been expedited then. The city will be clean in a few days,” he added.