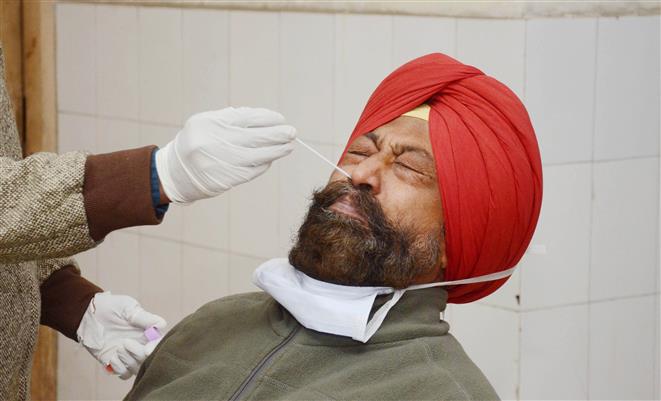 The two who succumbed to the virus were Manjeet Kaur (81), a resident of Shakti Nagar, who was admitted at Rattan Hospital, and Balwinder Kaur (28), a resident of Sultanpur Phillaur village, who was undergoing treatment at the Civil Hospital here.

As many as 905 persons received their booster dose today as part of the Covid-19 vaccination booster drive. With this, the total number of persons administered with the booster shot in Jalandhar stand at 6,313. The dose is being administered at all centres including the Civil Hospital, vaccination camps, ESI and Govt hospital at Garha. Meanwhile, the booster dose was administered to people who had received both their Covid-19 vaccine doses at least nine months ago.

As many as 506 youngsters in the age group 15-18 received their first dose of vaccination on Tuesday. The health centres where the vaccination drives took place today were ESI Hospital, Govt Hospital at Garha road, at Mahavir Jain School and at Maqsudan. A four-day Covid vaccination camp was organised at Police DAV Public School, Jalandhar, for the students of classes 9th-12th.

In Nawanshar, 53 new cases of Covid were reported on Tuesday, taking the district tally to 12,246. Those tested positive include residents of Urban Nawanshahr, Urban Rahon, Urban Banga, block Muzaffarpur, block Balachaur and among other places. Meanwhile, no new death was reported in Nawanshar district and the number of active cases stands at 528. The total deceased tally at Nawanshahr until now remains at 390.

As many as 508 new cases of Covid-19 were reported on Tuesday. With the fresh cases, the district tally reached 34,601. These include 2,399 cases reported from other districts. Meanwhile, two new deaths were reported in Hoshiarpur — a 55-year-old woman resident of Harta Badla block who died at home and a 66-year-old man of Chakkowal block, who died at a private hospital in Hoshiarpur. The Covid toll stands at 1,012 in the district.