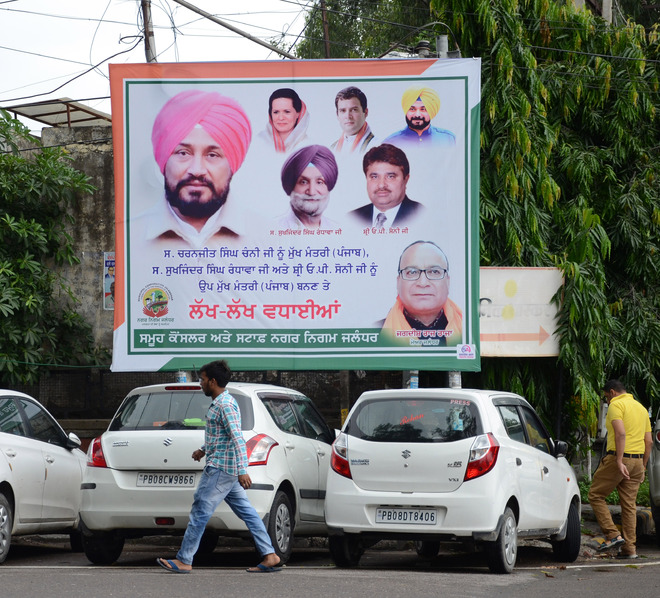 With Charanjit Singh Channi taking over as the new Chief Minister of Punjab, old hoardings bearing pictures of Capt Amarinder Singh are now getting replaced with that of new head of the state government.

Since Channi visited Doaba for two consecutive days this week, including Jalandhar and Kapurthala, congratulatory messages for him can now be seen across almost all important intersections of roads. Channi had travelled by road to Kapurthala from Chandigarh as his chopper could not take off in time owing to bad weather yesterday.

Even a day before, his chopper had landed near DAV University from where he travelled by road to Dera Sachkhand Ballan. All along his route, hoardings were put up by party workers in his support.

Initially, most Doaba leaders other than MLAs Pargat Singh and Bawa Henry had largely supported Capt Amarinder Singh, but after the change in the government and on the orders of the party high command, almost all of them now stand with Channi.

Members of Parliament Chaudhary Santokh Singh from Jalandhar and Jasbir Dimpa from Khadoor Sahib, who were staunch loyalist of Capt Amarinder Singh, too came along Channi yesterday.

Clearly, with almost all Congress leader backing Channi now, the change in hoardings was set to come. Today, employees of the Punjab Roadways also removed old stickers on some buses bearing pictures of Capt Amarinder Singh. The Public Relations Department is yet to prepare new stickers for pasting on buses.