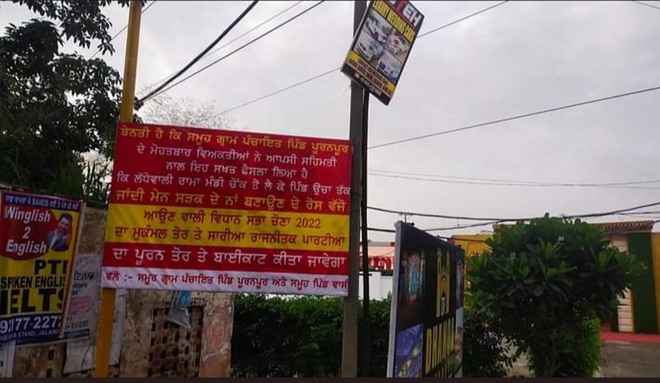 A board put up at Puranpur village announces boycott of all political parties in the 2022 poll.

At a time when Assembly poll-related activities are picking up pace, the Puranpur gram panchayat has decided to boycott leaders of all parties. They would not let the leaders enter their village as the road from Laddhewali Chowk to Ucha village has not been made.

A notice to this effect has been displayed prominently on a board at Puranpur. “For not acting on our repeated requests for the construction of a main road in the area, the residents of Puranpur have boycotted all political parties ahead of the 2022 elections”.

We have approached the MLA and the SDM and held dharnas, but to no avail. Villagers in the area are a harried lot. Such roads exist even in the 21st century and there is no one to listen to us.

The road is infamous for being dangerous and accident-prone. Given its awfully bad condition, it is said that “Road vich toye nhi toeyan vich road hai”.

The 20-km-stretch that runs from Ladhewali Chowk to Rehana Jattan village, via seven to eight villages in the area, has become a nightmare for commuters. Many motorists get a flat tyres on the stretch. Accidents are a common thing here. Windowpanes of cars or other vehicles develop cracks after being hit by small pebbles fired by tyres of the vehicles moving ahead on the stretch.

Harvinder Dhanoa, a resident of Puranpur village, says, “We would be better off with old mud roads and dirt tracks than this horrible road stretch. If you want to cause damage to your Rs 30 to 35-lakh vehicle, go down this road. My car had a flat tyre and windows were cracked while driving along the stretch. Pebbles and small stones fired by tyres of passing trucks hit my car glass.

“Many people have a fall once they enter the potholed patch. Scooters and bikes cannot even venture along this stretch as it has so big potholes. During the rains, many accidents take place here.”

Ranpal Sheemar, a resident of Parsaram village on the same road, says, “We have approached the MLA and the SDM and held dharnas, but to no avail. Villagers in the area are a harried lot. Such roads exist even in the 21st century and there is no one to listen to us, even as the elections are approaching. Scooterists cannot even dream of passing it.”

“For six years, no one has bothered about repairing the road. Unless the entire stretch is completely re-laid, the problem would not be fixed. The road is beyond repairs. And in the rains, it is an open invitation to road accidents.”