Allege water supply pipes not being put at required depth; many of these are very close to manholes 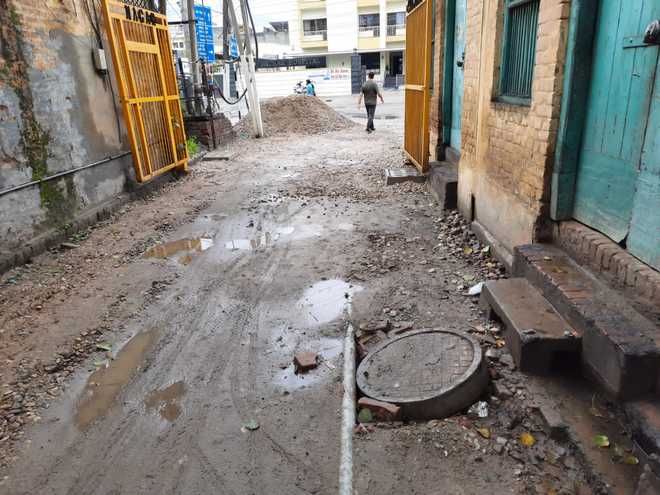 Water pipes have been re-laid right on the surface of the road and many of these are just next to the manholes. Tribune photo

For years, residents of Mohalla Krishan Nagar here had been getting a dirty, oily water supply. Persistent complaints to the local councillor led to pressure and work on re-laying water pipes began some days ago. Instead of getting relief, the residents are facing fresh worries.

For years, we have been getting potable water supply mixed with sewage water due to the presence of sewer pipes near drinking water supply lines. It has made our lives miserable. Now, when the MC is re-laying water pipes, it is doing such a bad quality work. The pipes have been re-laid right on the surface of the road, making it a clear case of shoddy work.

The plastic water supply pipes, which are being re-laid in the mohalla for the past fortnight, are not being put as deep in the earth as they should be. Residents feel that with pipes being just right under the surface, these can be damaged by heavy vehicles. Peeved at the shoddy work being done by the municipal corporation, residents demand that the water pipes should be laid at the required depth in the earth.

They said thin water pipes were being laid without any protective cover over them to avoid damage to them. These can burst under the weight of a heavy vehicle. Krishan Nagar area falls in Ward No.19 of the city where Uma Beri is the councillor.

RK Talwar, a resident of the area, says, “For years, we had been getting potable water supply mixed with sewage water due to the presence of sewer pipes near drinking water supply lines. It has made our lives miserable. Now, when the MC is re-laying water pipes, it is doing such a bad quality work. The pipes have been re-laid right on the surface of the road, making it a clear case of shoddy work. Many pipes pass right by or through manholes. Our grouse is: “Does drinking water get mixed with sewage water?”

“If they pass eight manholes, the plastic pipes will be damaged by acidic discharge in no time. We do not want sewer water enters our water supply again in a fortnight or six months. The MC should re-lay these pipes.”

Mohan Lal Aggarwal, another resident of the area, said, “We are thankful that the MC laid pipes after persistent complaints. Whenever we opened our taps, we got oil drops and greasy water for years in the area. It is after much persuasion that this new work was started. But we can see the freshly laid pipes due to shoddy work. The work started about 20 days ago. First, the MC dug up roads, now water supply pipes are being laid in at least three to four streets. We demand that this work should be stopped and the pipes should be put deeper in the earth but do not pass through manholes. We do not want to give an open invite to diseases in the area.”

The residents said the previous pipes had been laid at least 45 to 50 years ago, so these were now leaking, which may have led to the mixing of sewage with drinking water. After laying the water pipes, roads will also have to be reconstructed in the area.

The area councillor said, “We have been laying proper water supply pipes in the area which are being laid in accordance with the vents and connections available in the streets. The contractors have even been entertaining requests of some residents with private connections. Videos have been shared with me of the work which is going on smoothly. I am not aware of this recent issue. Those who have a complaint do come to my office and we will solve their grievance.”