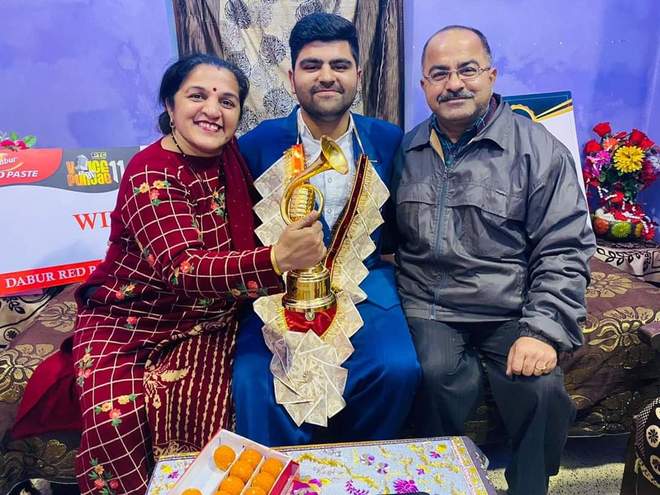 Abhijeet Bhandari and his parents pose with the coveted trophy.

City lad Abhijeet Bhandari (19) has won the PTC Voice of Punjab (Season 11) music competition. The budding singer had in the earlier season of the show managed to grab a seat among the top-four finalists. An ardent lover of Bollywood songs, he has also been making his mark in the classical and popular Punjabi songs.

A resident of Daulatpuri in Kazi Mandi, Abhijeet, came back home to a rousing welcome after participating in the show and eventually lifting the trophy.

Born and brought up in a family of teachers, Abhijeet developed his interest for singing when he was very young. Seeing his father humming the tunes of songs, he started his musical ride, which he further polished in his entire school life. Though he learnt the basics of singing during school events, he said the competition in his college further taught him the minute details associated with stage presence, mic usgage, changing notes etc.

A student of DAV College here, Abhijeet, had also bagged first prize in National Youth Festival, besides winning other youth festival events. He says, before participation in any reality shows, this live stage experience, boosted his confidence and gave him a recognition in Guru Nanak Dev University. To participate in the mega round of the audition, he even had to leave one of his graduation exam to attend the audition. A total of 24 budding singers got selected for the show.

He won a five-year music contract with PTC and one lakh cash prize. He wants to focus on pursuing a career in music only. “I want to do playback singing in bollywood. I want to hone my skill as I want to be known as a versatile singer. For this, I have also started taling formal training in classical music,” said, Abhijeet.

Apart from his family and friends, his school also celebrated his success by honouring him for his achievement. His college principal also congratulated him for his victory and awarded him with the college colour badge.