Councillors ask Raja to act against officials during House meet 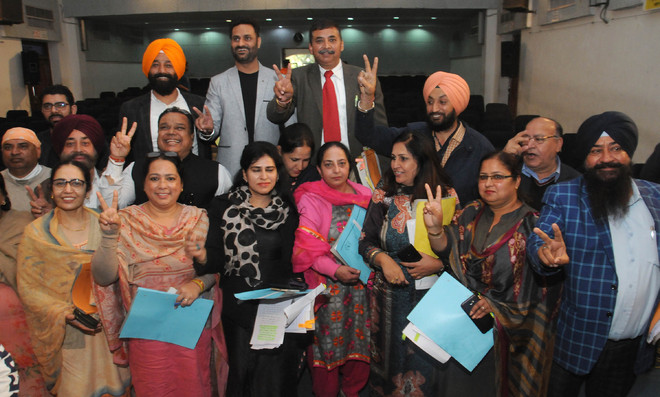 The Jalandhar Municipal Corporation’s councillors irrespective of their political affiliations, pressurised Mayor Jagdish Raja, during a General House meet today to cancel a tender issued to a firm (Creative Designers) in 2015 for installing unipoles in the city. The meet was held at Red Cross Bhawan.

As announced, MC officials remained absent from the meeting. Notably, discrepancies and alleged fraud in the entire process of installation of unipoles was highlighted.

Chairman along with members of the Advertisement Ad-hoc Committee had been alleging involvement of officials and the contractor in the alleged fraud.

During the meeting, the Mayor and MC Commissioner Karnesh Sharma after listening to the allegations of five members of the Advertisement Ad-hoc Committee said a month can be given to officials concerned to prove their point.

Every councillor present in the House opposed the move and said officials concerned had already insulted the House by not attending the meeting, thus they should not be given one month to reply.

Independent councillor Davinder Rony asked the Commissioner, Tusi afsara nu bachana chah rahe ho? (Are you trying to save officials?). Why are you asking for a month?”

Leader of Opposition Sushil Sharma said despite being in Bharatiya Janata Party, they were with Congress’s councillors who had exposed the scam. “We are here for development of the city. We demand stern action against the erring officials,” he said.

All councillors shouted in unison, Asi Jalandhar layi khade haan, bina kisi party baazi toh (We are together for our city, without any politics).

After much persuasion, the Mayor said: “Absence of officials concerned is definitely not right. They should have defended themselves by taking part in the meeting. As they are not here, show-cause notices will be issued to them.”

Raja said, “Also, if all of you want the tender to be cancelled, I will cancel it.”

Kamal Mittal, proprietor, Creative Designers, denied the allegations levelled against the firm. “All allegations are baseless. We will take legal action against those who have maligned our name,” he said.