Later, a dummy meeting organised to mock at Mayor, demand his ouster 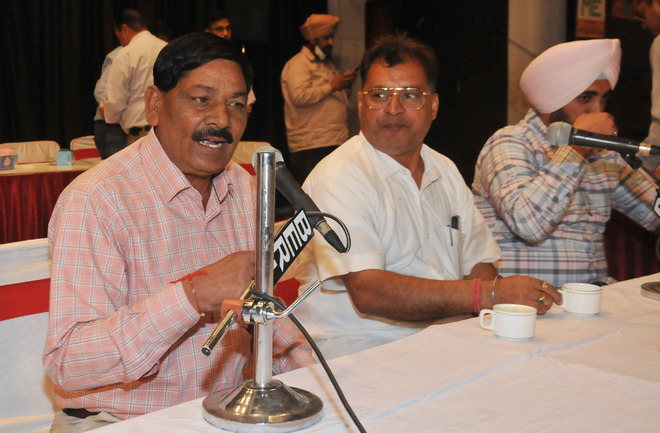 Just as all the councillors had barely settled at the venue of the Municipal Corporation House meeting at Red Cross Bhawan at 3 pm today and Mayor Jagdish Raja had got seated to start the proceedings, two councillors Pawan Kumar and Manmohan Raju came up with a request to postpone the meeting.

The councillors said they had not been able to read the copy of the agenda provided to them since October 18 as they were busy with Valmiki Jayanti functions in their areas. Seemingly all a pre-designed plan, the Mayor immediately took to the mike and announced that the meeting stands postponed and would be convened again sometime after four-five days. Saying this, he quickly got down from the stage.

As he was leaving the hall, some councillors confronted him saying that it was a sheer wastage of time and money to do this but he just waved his hand and left.

Rohan Sehgal, a Congress councillor, said: “Everyone who had come here had spared time of busy schedule to take up matters of city development to attend the meeting. There was no point in dispersing an already gathered assembly of councillors over such a trifle issue”.

Soon after, some Congress councillors got onto the stage. They took to the chairs that were occupied by the Mayor, MC Commissioner Karnesh Sharma, Senior Deputy Mayor Surinder Kaur and Deputy Mayor Harsimranjit Banti. Ward number 80 Congress councillor Des Raj Jassal took to the mike and started a dummy house meeting. Jassal sat on Mayor’s chair while other councillors sat along with him.

Jassal announced: “Whenever we meet next, we will elect a new Mayor. If our CM can be changed, our Mayor, too, can be changed. The reason why we need a change is the fact that no development work is being carried out in the city. We must send him out packing the way Capt Amarinder Singh has been dislodged as the CM. We must bring in a new Mayor to give him the command the way Charanjit Channi has been brought in as the new CM. We too need a good Mayor. Only then our party can come to power in the next MC poll.”

While some supported the move, others kept saying “No, no”. Later, Jassal said since Raja too had been Capt Amarinder Singh’s yesman, he too needed to be ousted. “Our city has become a hell under Raja’s Mayorship. The roads and in fact all the facilities are in such a bad shape. Only a new Mayor can bring everything on track”, he said.

Congress councillors Sushil Kalia, Jasleen Sethi, Aruna Arora and Uma Beri, however, condemned the move of Jassal. “There has to be decorum for everything. A councillor has to be pushy himself to get the work done. It is wrong to blame the Mayor for everything. His position commands respect and we as councillors of his party must support him,” they said.

‘There was no big project in agenda’

The councillors who opposed the postponement of meeting said: “There was no big project in the agenda which required to be studied in depth. The agenda was all about 2,000 new recruitments, extension to some existing contractual staff and small development works in some wards. Even if the councillors had not read the agenda, there was nothing much they had missed. There are so many issued outside the agenda, which we could have discussed as well. Alternatively, a quick run through the agenda for 10 minutes during the course of the meeting itself would have served the purpose. To our mind, there will not be any meeting till the polls. The meeting will get lingered on for several months now”.

All councillors got aghast at what had happened as many of the old timers said Mayor Raja had set a completely new example of postponing the already assembled House over such a lame excuse. “If the Mayor was to cancel the meeting, he should have announced it well in advance. Even the councillors who had the demand for postponement could have used the WhatsApp group in the morning itself to put in a request instead of doing it this way. It was all scripted to be done this way. Mayor chose his two favourite councillors to propose cancellation,” the councillors kept grumbling.