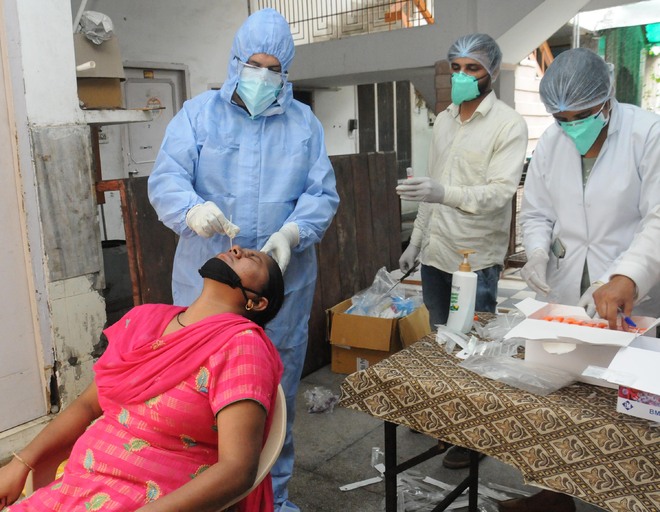 A sudden jump was witnessed after two days when 150 people tested positive for the virus on Tuesday. The Covid tally in Jalandhar recorded less than 100 infections for two consecutive days. The number of infected people in the district again included health workers. Meanwhile, four patients also succumbed to the virus on Tuesday taking the death toll to 385 in the district.

With 49 people testing Covid positive in Hoshiarpur on Tuesday, the tally has risen to 4,436, while the death toll reached 151 after five people lost their battle against the virus. With 2,162 new samples of people with suspected flu-like symptoms, the total number of samples taken till date has reached 1,03,359. As per the reports received from the lab, 97,693 people were negative out of this and 1,651 reports were still awaited, while 127 were invalid. There are 593 active cases so far and 3,693 patients have recovered. Civil Surgeon Dr Jasvir Singh said of the 49 new positive cases, 18 cases belonged to Hoshiarpur city, while 31 cases were from other health blocks. Those who died include a woman (80) and a man (82) of Khardehar village; a 63-year-old resident of Bajwara; and a 55-year-old resident of Haryana; a 70-year-old patient of Bishambahr Nagar, Hoshiarpur. — OC

Hoshiarpur: Veteran journalist Ashwani Kapoor (70) succumbed to the virus at a private hospital in Ludhiana on Tuesday. He was posted in Hoshiarpur as senior correspondent of the Punjab Kesari group. CM Capt Amarinder Singh expressed grief over his demise. The CM described Kapoor as a dedicated journalist and a fine human being, who was committed to the professional ethics and discharged his duties fearlessly throughout his stint spanning over four decades. He said Kapoor’s death had created a void in the field of journalism, which was difficult to be filled.