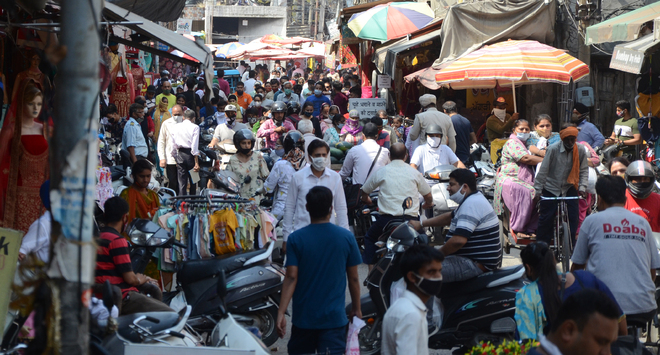 Just as numbers of Covid cases in the district have fallen from a peak of 1,200 plus to around 100 in the past week, residents have lowered their guard thinking that the second wave has totally ended.

The city has started to witness massive traffic jams and shoppers can be seen thronging markets. For a moment, it seems that normalcy has been restored with coffee shops beginning to draw crowds and playgrounds opened up for players.

Political activities and dharnas by various sections of society were on the full swing as the 2022 Assembly elections draw near. Despite schools and colleges being closed or on summer break, youngsters can be seen roaming around aimlessly.

Moreover, residents have once again stopped following the health guidelines issued by the government to keep Covid at bay. People seldom practise social distancing or wear masks at at social, political or religious gatherings. Even the size of gatherings has started to increase, thus making mockery of the norms.

The Aam Aadmi Party had a gathering of around 400 activists as it held a protest against the SC scholarship issue a few days ago. Around 300 workers of the Bahujan Samaj Party took part in a meeting in Phillaur on Sunday.

As Martyrdom Day of Guru Arjan Dev was observed today, majority of the devotees and sewadars, including children were seen sans masks in most gurdwaras. Glasses used in chhabeel were not disposable and washed time and again to cater to large numbers. However, Gurdwara Singh Sabha, chose to serve disposable and packed thalis.

The health authorities have been repeatedly asking masses to follow SOPs, as the third wave could attack more people with newer strains.

As people complained about facing hardships in wearing masks during hot and humid weather, doctors asked them to go in for soft cotton and multi-layer masks.

Kapurthala Civil Surgeon Dr Parminder Kaur said, “People have to remain watchful all the time. One must not stop washing hands, sanitise surfaces, practise social distancing and wear masks. We have been again and again asking people not to become complacent after getting vaccinated.”