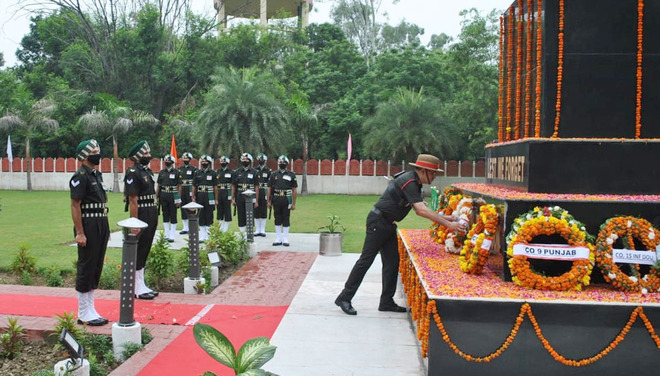 On the occasion of the 22nd anniversary of the Kargil War, Lieutenant General C Bansi Ponnappa, General Officer Commanding, Vajra Corps, offered tributes to the Kargil martyrs at a solemn wreath laying ceremony held at the Vajra Shaurya Sthal in Jalandhar Cantonment today.

During the ceremony, homage was paid to the bravehearts who laid down their lives in supreme sacrifice to the nation during Operation Vijay. The event was attended by senior officers and serving personnel with restricted attendance as per Covid protocols. Similar functions to honour the Kargil martyrs were also held in all stations under Vajra Corps.

A pledge was taken by all attendees on the occasion to rededicate themselves to uphold the highest traditions of the Indian Army and honour of the Tricolour.

The Kargil Vijay Divas function was observed at War Memorial today by the Kashyap Naujawan Sabha. Led by Pawan Kashyap, the members of the sabha decorated the War Memorial, especially the Kargil gallery and the area where jyoti is lit up to commemorate the day.

The sabha members donated a tricycle to a family member. Five needy families also received ration. School bag and stationery items were also distributed to the children of the martyrs. Unlike previous years, no cultural show was held today owing to Covid restrictions. Since it rained heavily at the time of the event, the entire function was held in a hall at the basement of the building.