Youth, who had appeared for recruitment for the post of constables in the Punjab Police and are alleging anomalies in the screening of candidates after the written test, sat on dharna at BSF Chowk on Thursday putting the residents of the entire area into a huge traffic mess.

We cannot use force against the youth owing to directions from the top on remaining soft till the elections. Since the resentment of the youth is specifically over police recruitments, our bosses are extremely cautious. But we are trying to look for ways and means to get the dharna lifted. They are adamant that the previous bar of selection be taken into account for making a merit list. Senior police officials

About 50 youth who sat on the dharna at 11 am continued squatting on the Old GT Road till late evening. The dharna caused massive inconvenience to the commuters who were to head towards Amritsar, Ludhiana or Chandigarh as they got stuck in long jams and were put on diverted route, which made them go around the entire city before eventually reaching their destinations. Schoolchildren, bus passengers, ambulances and government vehicles – all got caught up waiting for hours to be rescued. 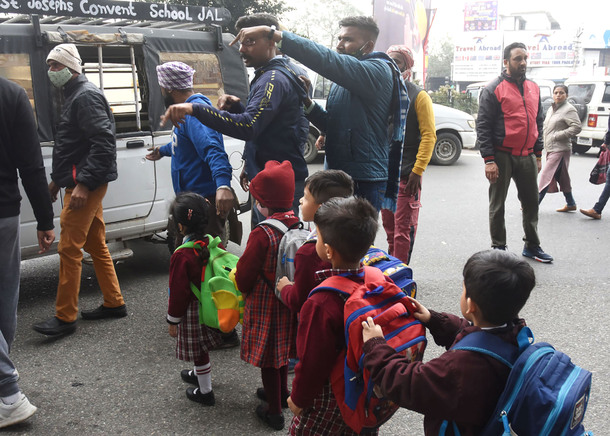 Deepak said: “The administrative and police officials came to request us to vacate the site but we told them that we will not move till our demands are accepted. In the evening, we lifted the dharna for some time as the officials of the Punjab Police Recruitment Board had called us for talks at PAP complex. We went there, but our issues remained unresolved. So, we again sat on dharna and intend to continue the night through and may be indefinitely till our demands are accepted. We want all the anomalies to be removed before the process is taken further.”

The traffic congestion because of the dharna spilled across on all directions with Chugitti, Domoria ROB and Guru Nanakpura localities getting huge streams of vehicles that could ply only at a snail’s pace. Even as the youth had closed only one side of the road, the other one got clogged due to the poor management of the traffic police.