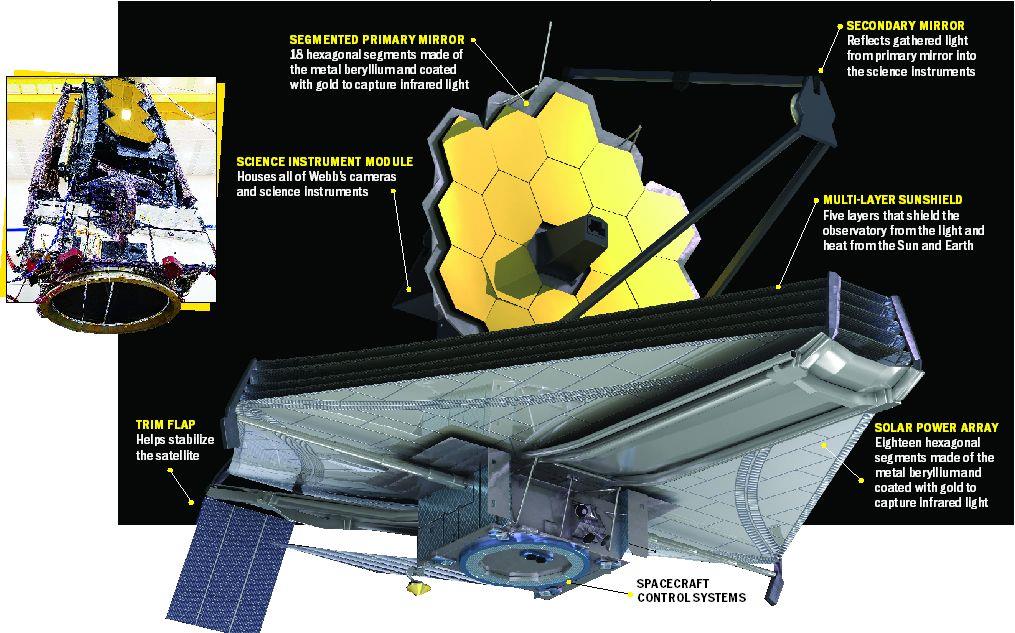 NASA’s long-awaited, greatly anticipated James Webb Space Telescope (JWST) has blasted off on a mission to revolutionise our understanding of the cosmos. Launched on December 24, JWST is on a mission to look deeper into the Universe — and therefore further back in time — than even the legendary Hubble Space Telescope, which it succeeds.

James Webb Space Telescope (JWST), the large infrared telescope, will study "every phase" in the history of the Universe, including the Big Bang, the formation of solar systems that are capable of supporting life on other planets and also, the evolution of our own Solar System. It is also considered a successor of the Hubble Telescope and will extend and complement its discoveries.

Because of JWST's longer wavelengths, for instance, it will be able to look further back in time, “to find the first galaxies that formed in the early Universe, and to peer inside dust clouds where stars and planetary systems are forming today”.

The telescope will travel to a distance of about one million miles (1.5 million km) away from Earth, where it will undergo about “six months of commissioning in space-unfolding its mirrors, sunshield, and other smaller systems; cooling down; aligning; and calibrating. Astronomers worldwide will then be able to conduct scientific observations to broaden our understanding of the Universe”. It will take about a month for Webb to cover this distance.

What are the telescope’s main goals?

JWST has four central goals, including to search for the first galaxies that formed after the Big Bang, to determine how galaxies evolved from their earlier formation until now, to observe the formation of stars from the first stages to the formation of planetary systems and to measure the physical and chemical properties of planetary systems and investigate the potential for life in such systems.

How will JWST be launched?

JWST will be launched on an Ariane 5 ECA rocket from French Guiana in South America. The rocket system is being contributed by the European Space Agency (ESA). The Ariane 5 is believed to be one of the most reliable launch vehicles and will be responsible for making sure that the telescope reaches its destination in space. 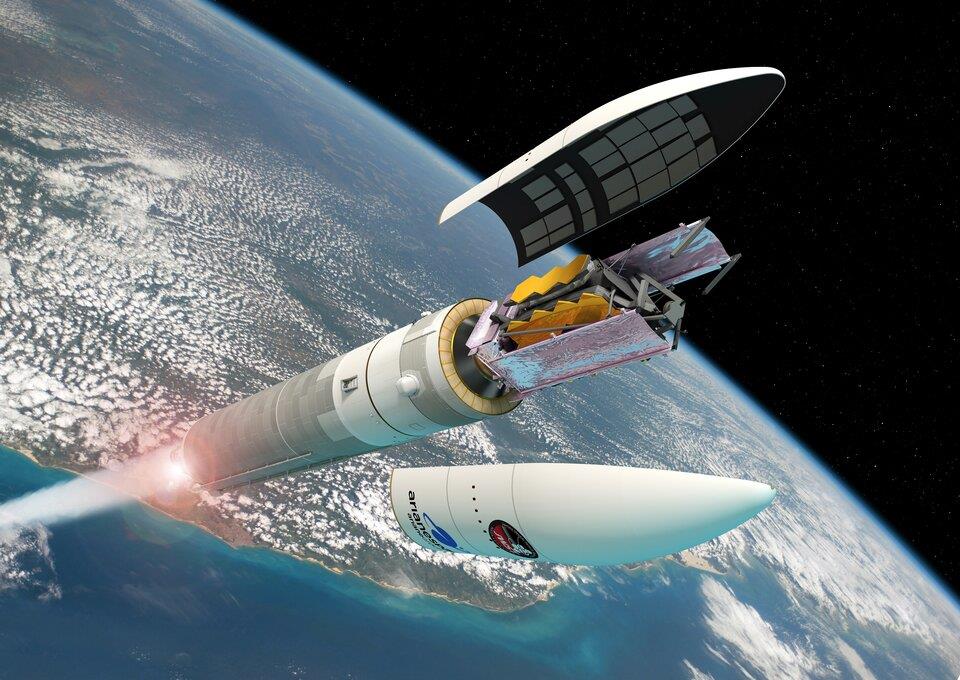 Webb will have an approximately 6.5 meter diameter primary mirror, which would give it a significantly larger collecting area than the mirrors available on the current generation of space telescopes. Hubble's mirror is a much smaller 2.4 meters in diameter and its corresponding collecting area is 4.5 m2, giving Webb around 6.25 times (see calculation) more collecting area! Webb will have significantly larger field of view than the NICMOS camera on Hubble (covering more than Rs15 times the area) and significantly better spatial resolution than is available with the infrared Spitzer Space Telescope.

The Earth is 150 million km from the Sun and the moon orbits the earth at a distance of approximately 384,500 km. The Hubble Space Telescope orbits around the Earth at an altitude of Rs570 km above it. Webb will not actually orbit the Earth - instead it will sit at the Earth-Sun L2 Lagrange point, 1.5 million km away! Webb will orbit the sun 1.5 million kilometers (1 million miles) away from the Earth at what is called the second Lagrange point or L2.

JWST is one of the most expensive scientific platforms in history. The total cost is $9.7 billion and is spread out over 24 years including five years of operations.

“Not only are its costs spread out over more than two decades, but its total cost pales in comparison to human spaceflight projects, infrastructure spending, or even a partial border wall, writes our senior space policy advisor Casey Dreier. Compared to the hundreds of billions of dollars the United States spends per year on defense, social, and medical safety net programs, the James Webb Space Telescope's cost is a rounding error." 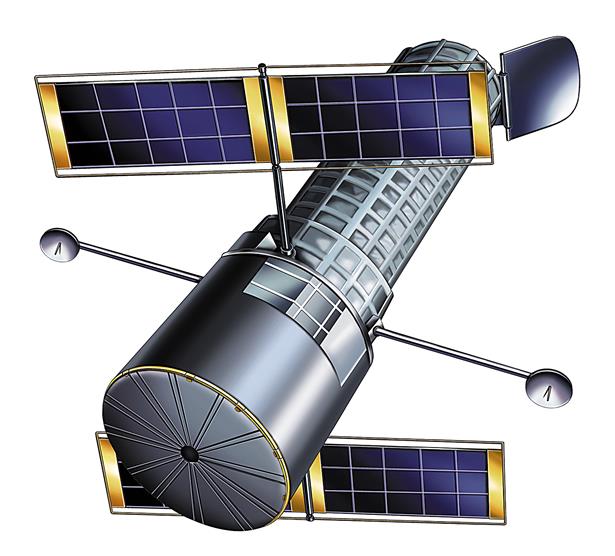 What's in a name?

JWST is named after James Webb, who served as NASA's second administrator from 1961 to 1968 and felt that the agency should balance the Apollo Moon landings with a strong science program.

More than 1,700 space scientists and enthusiasts - including people who have applied for observing time on the telescope - have asked NASA to change the name.

The reason? Archival evidence shows that while serving as undersecretary of state prior to his tenure at NASA, Webb participated in discussions regarding the "lavender scare," an effort to purge queer people from government service.

In 1963, while Webb was administrator, a NASA employee in Washington, D.C. was arrested, interrogated and fired for making a "homosexual advance."

In September 2021, NASA announced that a historical review found no evidence that warranted changing the telescope's name.

Overview Webb often gets called the replacement for Hubble, but we prefer to call it a successor. After all, Webb is the scientific successor to Hubble; its science goals were motivated by results from Hubble. Hubble's science pushed us to look to longer wavelengths to "go beyond" what Hubble has already done. In particular, more distant objects are more highly redshifted, and their light is pushed from the UV and optical into the near-infrared. Thus observations of these distant objects (like the first galaxies formed in the Universe, for example) requires an infrared telescope.

This is the other reason that Webb is not a replacement for Hubble; its capabilities are not identical. Webb will primarily look at the Universe in the infrared, while Hubble studies it primarily at optical and ultraviolet wavelengths (though it has some infrared capability). Webb also has a much bigger mirror than Hubble. This larger light collecting area means that Webb can peer farther back into time than Hubble is capable of doing. Hubble is in a very close orbit around the earth, while Webb will be 1.5 million kilometers (km) away at the second Lagrange (L2) point. 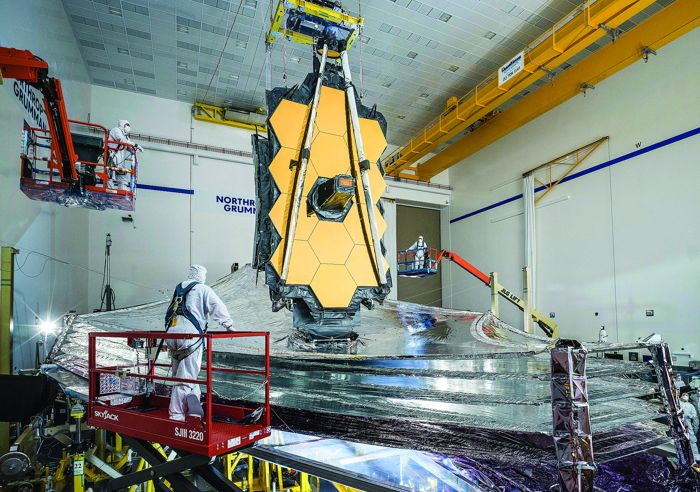 The mission: The James Webb Space Telescope (Webb) is the next great space science observatory following Hubble, designed to answer outstanding questions about the Universe and to make breakthrough discoveries in all fields of astronomy. Webb will see farther into our origins: from the formation of stars and planets, to the birth of the first galaxies in the early Universe.