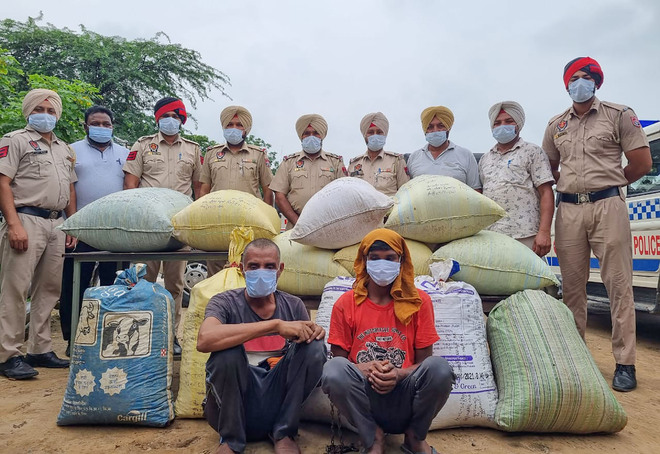 The two accused, from whom 180 kg of poppy husk was seized, in the police custody.

The arrested accused have been identified as Jatinder Singh of Gurdaspur and Ravi of Mukatsar Sahib. Senior Superintendent of Police (SSP) Harkamalpreet Singh Khakh said the district police is keeping a close vigil on the activities of narcotics smugglers active in Kapurthala. He said checking teams were formed under the supervision of SP (Investigation) Vishaljit Singh and DSP Kapurthala Surinder Singh constituting SHO Kotwali and Incharge police post Badshapur.

He added that the police teams while patrolling in the area found a suspicious truck standing near Boot village and during search impounded the alum-loaded truck (PB-06-N-9671) along with two smugglers and 180 kg poppy husk.

He told that every time, these smugglers adopted a new modus operandi to hide these drugs and to avoid foul smell of poppy husk. This time they loaded the truck with alum and hid the consignment in the canvas.

SSP said that all accused were booked under various sections of NDPS Act in a case registered at police station Kotwali. He added that the accused would be produced in the local courts and would be taken on remand for further interrogation and to arrest the remaining members of the racket.