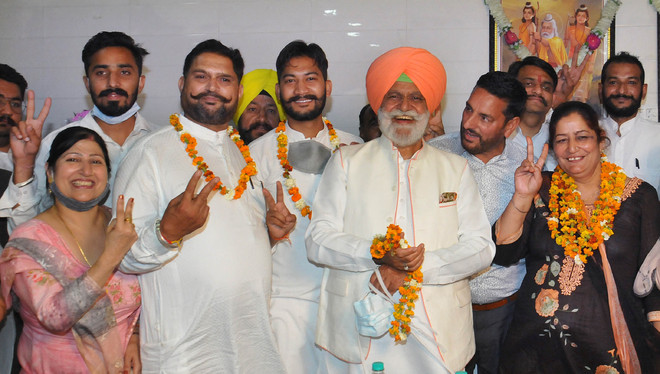 A woman has become the first Mayor of the Kapurthala Municipal Corporation.

Kulwant Kaur has been councillor of the municipal corporation twice. After she was appointed the Mayor, party workers danced to the beats of dhol and distributed sweets. Since Bakshish Singh’s death, her son Rajvir ‘Bawa’ Labbha has been supporting his mother all through the campaign.

Garlanded by supporters, Kulwant was embraced and congratulated by co-workers. Kulwant, who was councillor from Ward No.3, won by a margin of 1,070 votes. The Kapurthala Municipal Corporation has 50 wards, of which 45 councillors are from the Congress and three from the Akali Dal and two are Independents.

Kulwant Kaur said, “We are thankful for the support of all our voters and MLA Rana Gurjit Singh for their support. I have planned to get all the works of the municipal corporation, which were hitherto taking a backseat, completed. We will motivate people in our area and in the city towards vaccination. A campaign in this regard was already being run in our area.”

On the occasion, the Mayor asked all her colleagues to get vaccinated. MLA Rana Gurjit Singh, who was present on the occasion, administered oath to the Mayor and other members in the presence of Deputy Commmissioner Deepti Uppal.

All the councillors were asked to get vaccinated before the first meeting of the civic body takes place. Notably, the nagar council which had 29 wards, formerly called nagar council, became a municipal corporation only in February 2019. It had been functioning without a mayor so far.