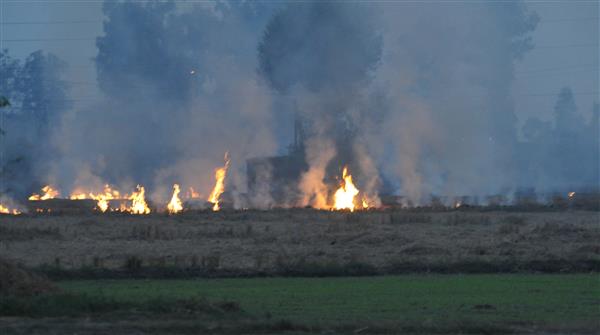 Paddy stubble set on fire in fields on the outskirts of Kapurthala. - File photo

Farmers, officials to be felicitated

Farmers who did not burn stubble and officials who diligently performed their duties would be honoured by the administration. Vishesh Sarangal, DC

Deputy Commissioner Vishesh Sarangal said during the current season, there were 1,275 cases of stubble-burning from September 15 to November 21, which were 1,784 in 2021. He further said incidents of stubble-burning were less than that in 2020, when 1630 cases were reported.

Roughly, 509 fewer farmers burned paddy stubble this year in Kapurthala compared to 2021; and 355 fewer in comparison to the figure of 2020.

The Deputy Commissioner said the reduction in stubble-burning cases had been possible due to the efforts of the administration in encouraging farmers not to take to the malpractice.

The DC applauded the role of SDMs, officials, farmers, Agriculture and Farmers’ Welfare Department, Rural Development and Panchayat Department, PPCB and the Education Department in taking care of environment and soil health.

The DC said the nodal officers, surveillance teams and supervisors were deployed by the district administration to prevent the stubble-burning. He said officials were regularly visiting the fields to encourage the farmers to avoid burning of crop residue.