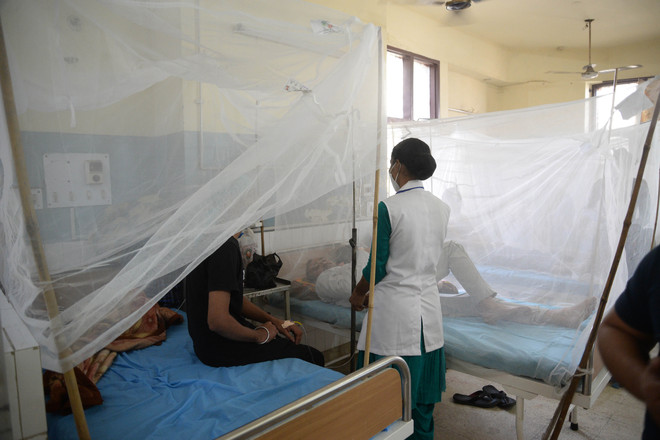 With no let-up in dengue in the region, the cases in Kapurthala have reached 432. The Health Department termed migrant population and lack of awareness among people living in congested areas as a reason behind the spurt in cases.

While Jalandhar district has reported 178 dengue cases, Kapurthala district has more than twice the number of cases.

Out of 432 cases, most have been reported from Bholath in the last two months. Coolers, tyres, refrigerator trays, open utensils have been found as prime breeding grounds for mosquitoes.

The rise in dengue cases was primarily seen in July after which the cases dropped in August, but a steep hike has been witnessed again in September and October.

Kapurthala district reported 2 cases (each) of dengue in May and June and saw 49 cases in July. In August, the cases dropped to 10, in October, 210 cases have been reported in the district so far.

Of the 432 cases (reported since January) a whopping 255 cases have surfaced from Bholath. Of these 255, as many as 207 cases have been reported in September and October. Seventy-five cases have been reported Kapurthala city, 39 from Dhilwan, 21 from Phagwara, 20 from Kala Sanghian, six from Panchatt, five from Sultanpur Lodhi, four from Begowal and Tibba and three from Fattu Dhinga.

Sources in the Health Department said, “Follow up of patients has revealed that most of them are migrants.

Many said they keep changing places from time to time. In the case of Bholath, most migrants do not even know which locality they live in. There is lack of awarenes, thus dengue has spread its tentacles.”

Kapurthala Epidemiologist Dr Nandika said, “We held meetings with councillors earlier and now fogging drives are being conducted by the MC daily. Teams have been dispatched to areas where larvae is being detected. Teams of breeding checkers are also conducting regular inspections. All measures are being taken to prevent further breeding of mosquitoes and people are also being made aware.”

Jalandhar Epidemiolgist Dr Aditya Paul said, “While fogging is being carried out regularly by the MC teams, health teams are daily inspecting affected areas. Anti-larval and spraying measures are also being taken.”