Kashmir to Kanyakumari in 50 days: Armyman gets grand welcome in Jalandhar 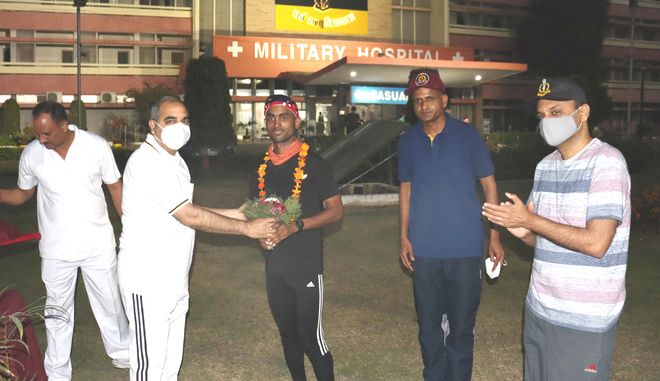 In order to make it to the Guinness Book of World Records, an Indian Army soldier, Naik Velu P, who started ultra-marathon from Srinagar to Kanyakumari reached Jalandhar on late Monday night.

The Armyman is eyeing to complete 4,300-km run within 50 days. Naik Velu P was given a grand welcome by Brigadier V Anand and all ranks at the Jalandhar Military Hospital on his arrival from Srinagar via Pathankot.

Velu P was born in Krishnagiri (Tamil Nadu) and joined the Indian Army in 2011. He started the ultra-marathon from Srinagar and has covered 480 km by covering an average distance of 80 km to 100 km daily. The Armyman is serving as a nursing assistant at the 60 Para Field Hospital. The ultra-marathoner said objective behind his run is ‘One Nation, One Spirit’.

In June last year, Naik Velu P became the first Indian ultra-marathon to complete 1,600 km in just 17 days. He has been representing the Athletics Federation of India (AFI) in long-distance runs for the last four years. In September, he will be representing the country at World Championship in Romania. All ranks of the Vajra Corps wished him success.