Student of a Hoshiapur govt school, she studies during train journey to make best use of time 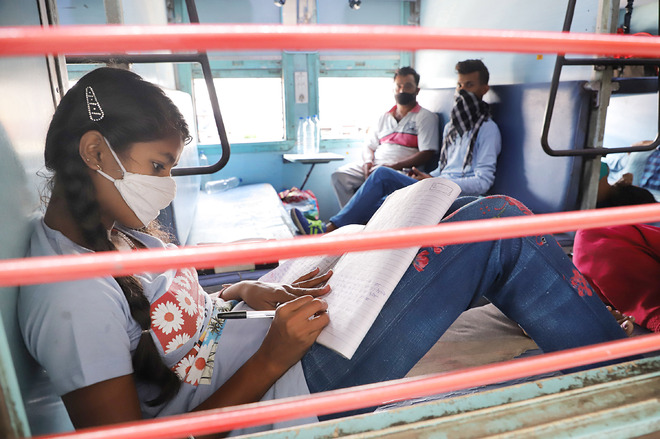 Sapna, daughter of a migrant, studies onboard a Shramik Special train. sarabjit Singh

As a Gorakhpur-bound Shramik Special train from Hoshiarpur stopped at the city railway station on Tuesday morning, there was an unusual sight. Unmindful of all activity around her, a young girl seated near the window of the train could be seen deeply engrossed in solving mathematics sums in her notebook.

On being asked to introduce herself, she tells that she is Sapna, a Class VIII student of Government School in Shergarh, Hoshiarpur, and that she aspires to join the police forces.

“I am going back to my paternal grandparents’ place in Gorakhpur. During all this while, I do not want to miss my studies. Hence, I have got all my books along. I have to finish up learning three-four chapters of all subjects in two months of the stay. I do not want to waste this time even in the journey,” she quickly engages in a chat.

She says: “I am travelling along with my dad, mom and elder brother. My dad sells plastic goods on a cart in streets of Hoshiarpur. During these days, he has not been able to earn well and wanted to go home. I told him that I would go only if he will ensure that we will be back by July or before the resumption of classes. So, as there was an announcement that the classes won’t commence before July, I told my dad that I was ready to leave but would take my school bag along.”

The girl showed her grit and determination and she spoke with a lot of conviction.

“I am Sapna (meaning dream) of my father. He gave me this name as he says that he wants to live his dreams through me. It is he who is inspiring me to join the police forces so that we all live a comfortable life thereafter. And I have to fulfill his dream,” she says as the train is set to chug off from the station.