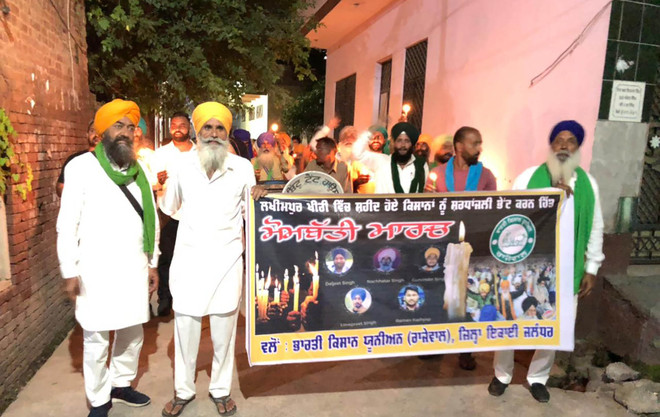 Farmers hold a candle march to pay tributes to farmers who died during Lakhimpur Kheri violence.

Farmers on Tuesday paid tributes to farmers who lost their lives in the Lakhimpur Kheri violence by lighting candles at their houses. The farmers who have been participating in the farmers protest for the past 11 months also urged their supporters to light at least one candle in their homes to pay homage to the deceased farmers and journalist Raman Kashyap.

Gurpal Singh, a Jalandhar based farmer, said the tribute was paid on the call of the Samyukta Kisan Morcha. "The farmers have been deeply affected by the death of their brother. We wish their souls rest in peace", added Gurlal.

Following the call by the Samyukta Kisan Morcha, students under the banner of Punjab Students Union (PSU) also paid homage to the deceased farmer and demanded action against the perpetrators who killed the innocent farmers.

With posters and banners the students condemned the attack on farmers and termed it as an 'attack on democracy'. PSU paid homage to the deceased farmers of Lakhimpur Kheri violence at Lyallpur Khalsa College and described them as 'martyrs'.

District president Varjit Kaur, student leaders Sonia and Manish said the BJP government was trying to suppress the movement of the farmers.