Teacher & disability activist Pavel is a role model among peers 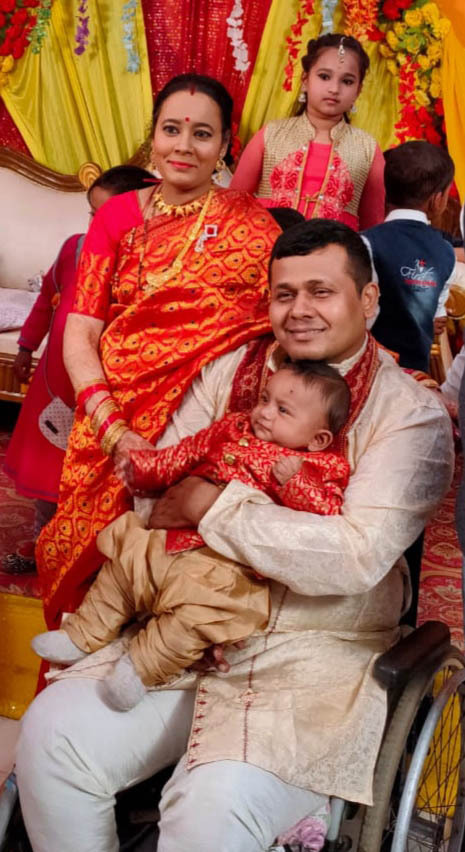 Pavel Pasla with his wife Parineeti and son Ayaan

His poignant love story is the talk of the town. His students swear by him and he considers himself lucky for having immensely supportive parents.

While Pavel Pasla believes he is blessed to have the life, which he is currently leading, it is through insurmountable support of his loved ones and his sheer grit and determination, that the 40-year-old is setting benchmarks for those around him.

Teacher and disability activist Pavel Pasla is an example for his peers.

“Telling stories, sharing your experience and preparing people for their life ahead is a liberating experience. It feels great when you know you can prevent others from going through the suffering you went through,” Pavel says.

A teacher at the Police DAV Pubic School, Pavel has been in the profession for the last eight years. Fifteen years ago, he was paralysed in an accident, which left his limbs immobile. Spending the first few years in extreme disappointment, it was his job, his parents support and serendipity in the form of finding a loving life partner, which turned his life around. The accident woke him up to the lack of awareness regarding issues of disability and he has been working ever since to help others like him.

Pavel Pasla says: “I was driving my bike, when I was hit by a trolley. Friends put me in a gypsy, after which I went through some doctors before finally reaching DMC Ludhiana. One of the initial doctors made me sit up despite my injury, which aggravated my injury. I know now he was just trying his best to help. But due to lack of awareness, he didn’t know it would rather cause problems. After the accident, my lower body was paralysed. For five to seven years, I was extremely heartbroken. My life changed, freedom was curbed. I couldn’t go out and do things like before. I needed help.”

However, an encounter with his father Comrade Mangat Ram Pasla changed his perspective.

Pasla says: “All through my ordeals, my parents have been very supportive. My father never skips his meetings. He’s very particular about it. One day, I was sad, crying and saying I don’t want to live. Seeing me, he skipped his meeting and he started crying too. From that day, I thought I have no right to ruin my parents’ plans and commitments. Since then, I haven’t let my father shed a tear over me. I started taking online jobs and started keeping myself busy.”

Life took a pretty bright turn after he got his job.

“I am extremely thankful to Dr Rashmi Vij, Principal, Police DAV Public school, who gave me a job and placed trust in me. I developed a social circle with teachers and friends and with students I got a slice of childhood back. I got married because I had this job. I was earlier apprehensive about even going out, shy of being seen in a wheelchair, but the love and trust I got at school, turned things around.”

Pavel is one of the founding members of the Spinal Cord Injury Association, which has been reaching out to people with spinal injuries. The organisation has helped countless people to cope with spinal damage and disability in the state. Pavel met his wife through a common friend and now with a 9-month-old son, he loves his wife even more, as she has been a huge support system.

“My wife liked me for my thoughts. She has given her life to me. I consider myself very lucky. I am doing things I could never imagine and do in my life. I’ve met all kinds of people but a majority of them have extended a helping hand and reached out to help when I took one step towards them. Our endeavour and attitude really turns life around.”