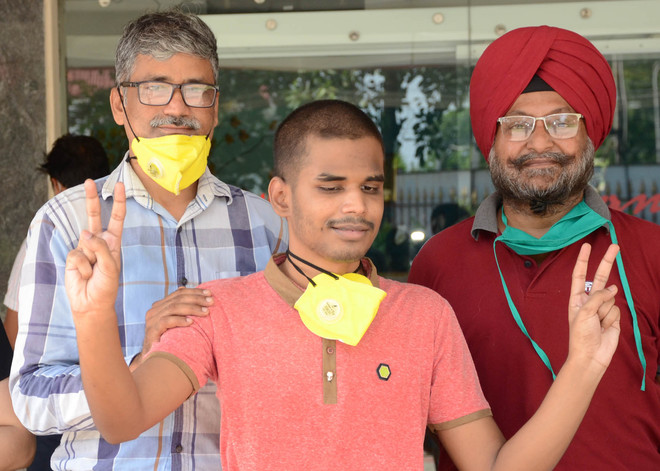 Considering his disability as the ability, 18-year-old Dhruv, a visually impaired student of MGN Public School, Adarsh Nagar, has emerged among the toppers of the district as he obtained 98.2 per cent marks in the CBSE 12th board results.

His vision has been impaired since birth. With the help of a reader he wrote his answers on his own in the examinations. Sharing his scorecard, he said he scored 100 in English, 95 in Accountancy, 99 in IP, 98 in Business studies, 99 in Economics and 46 in Maths.

Dhruv, who is well-versed with all the modern technology, aims to become a software developer and would like to establish his own start-up. “My study timetable is similar to any normal teenager, and I used to spend over five hours daily in preparing notes and going through the syllabus of all the subjects. The only difference was that while other students wrote their notes on copies, I used to type them on his laptop,” he says.

Apart from his teachers who made sure that he got hang of all the topics, Saksham, a city based organisation that works for disabled helped in prepared all his notes. “I used to send them the books and the study material that I purchased and would either transcribe them or send in in audio files,” he shares. He feels that that one should never study for the sake of good grades, instead the focus should be in enjoying the studies and learning something that entice them.

A resident of Gurunanakpura, Druv, is son of Rajeev Kumar and Rajni Bala, both are government school teachers by profession. “I feel blessed to have parents who have been my pillar of strength. Though, I am not able to see this world with my own eyes, my parents always gave me a vision to shape my career and keep my spirits soaring,” he says.

Dhruv also had a word of praise for his teachers who played an important role in his preparations. “I very well remember that during my preparations, how my teachers made themselves available for me even after school hours.”