Govt should waive or reduce GST to half for some period to boost the economy: Rajiv Sharma 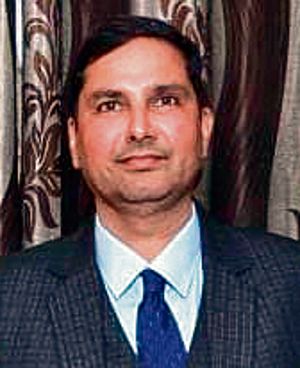 THE unprecedented global health crisis has jeopardised the country's economy and has impacted every individual. Many industrial units are staring at a bleak future while hoping for a good economic package from the government for their survival in these critical times. Rajiv Sharma, owner of Ashoka Rolling Works, is no different. Established by his father in 1972, the firm is a small industrial unit of wire drawer. In an interview with PK Jaiswar, he talks about the impact of the Covid-19 pandemic on the business in the past two months. Excerpts…

This is definitely a challenge for the small and medium scale industry. However, the government has asked banks to give loans generously, albeit after fulfilling all conditions. This is not going to help small industries. It appears that the Centre or the state governments are not pro-MSMEs.

How has the lockdown impacted your business?

No doubt, the lockdown has dented every single industry everywhere. My firm deals in iron wire drawer and raw material comes from outside Punjab while the finished product is also exported out of the state. As the entire country is under lockdown, we are facing problems in getting raw material and later, supplying the finished product. At present, we are operating with 50 per cent strength. It has become difficult for us to meet the expenses. We are like in a Catch-22 situation right now. We don't know how to survive in this period.

Do you expect your business will resume with full capacity in the near future?

Frankly speaking, we don't expect the situation to improve in the near future. It would take at least one year to get back on track, if we survive it. Labourers have returned to their native places after getting panicky in the current scenario when they had no cash.

How are you dealing with the issue of paying salaries to workers?

We have been paying our workers and also making all-out efforts to ensure that they get essential items, including dry ration. I still believe that no one will sleep hungry in the holy city. I always ask my workers to share their problems with me. But as I said earlier, survival is becoming harder and harder.

Do you consider the current crisis a challenge or an opportunity?

This is definitely a challenge for the small and medium-scale industry. However, the

government has asked banks to give loans generously, albeit after fulfilling all conditions. This is not going to help small industries. It appears that the Centre or the state government is not pro-MSMEs.

What are your expectations from the government?

A recession has been going to continue for a longer period. The government should waive or reduce the GST to half to a certain period to push the economy. It should also waive power bills further. The government should have financially helped the medium and small industry to stay alive. Though the government offered loans through banks, it is after all a loan.