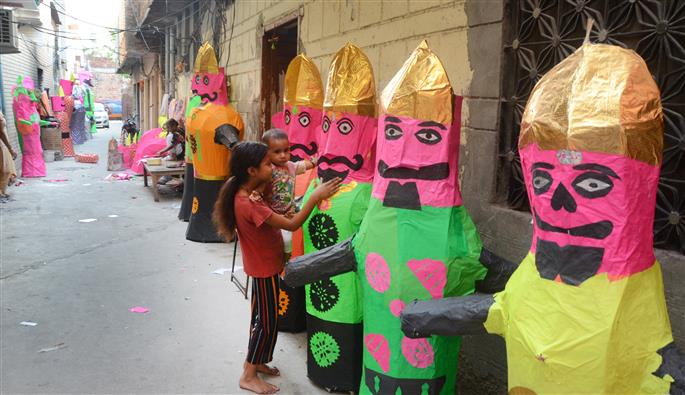 Local artisans on Jail road here, which has been making Ravana effigies for generations, are facing financial problems due to decrease in orders. They said their business already remained affected in the last two years owing to Covid-19, and this year they were expecting a surge in the orders but the response is almost negligible.

Talking to Jalandhar Tribune, Kasturi Lal (54), who has been engaged in making effigies for the past over 40 years said the craze for Dassehra celebrations had seemingly dropped among city residents. “It was for the first time that none of the local artisans have received orders from local Dassehra committees or residents. The few orders which we have received were from nearby villages and other states”, he said.

He added that local Dasehra committees are placing orders with other artisans from UP and Bihar, who migrate to the city only ahead of Dassehra, and offer effigies at comparatively low prices. “The residents must understand that our profits are shrinking. Moreover, we don’t do this business to make profits, rather it’s for our survival. We haven’t learnt any other art, so we don’t have the option to move to another occupation”, he added.

Another artisan, Arjun (32), a third-generation effigy maker, said his grandfather and father were in the same business. He said the demand for effigies has gone down in the past few years owing to fire mishaps, rising pollution and other reasons.

He also said that he hardly received any order from local residents of the Dassehra committee. “I received orders from Himachal, Hoshiarpur, Shahkot and other villages”, he said.

Sharing his journey as an effigy maker, Arjun said, “I managed to marry off my two sisters from the money I had earned after selling effigies. I left my sports career to help my father in this effigy making. But after he passed away four years back, I faced difficulty in getting orders,” he said adding that he’s not sure if he will be able to carry forward his family legacy as effigies makers as the job is not sufficient to meet the needs of his family of five.