Had murdered an NHAI surveyor and robbed Rs 30,000 from a store owner 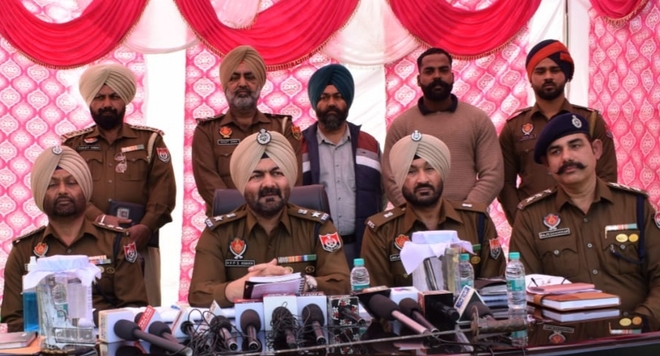 Kapurthala SSP HS Khakh addresses a press conference after the twin crimes of murder and loot were solved in Kapurthala on Monday. Tribune photo

With four fresh arrests, the Kapurthala police claimed to have solved the loot incident at Sultanpur Lodhi’s Khalsa Super Store and the murder of an NHAI surveyor at Ibban village in Kapurthala.

The mastermind of both crimes — Monu Dhapai — and all his gang members were arrested by the police on December 5.

The twin crimes serve as a classic reference to lack of fear of law enforcement agencies among emboldened criminals, who think they can get away with anything.

Notably, the case involves two separate crimes for which two sets of arrests were made on November 27 and on December 5.

While the police arrested two persons on November 27 for the murder in Ibban, four fresh arrests of gang members hailing from Kapurthala and Shahkot were made for the Sultanpur Lodhi loot incident. While one of those arrested hails from Kapurthala, the remaining three are from Shahkot (in Jalandhar).

Monu Dhapai is the only one among the four, who was involved in both crimes, in which a total of six arrests have been made so far.

Addressing a press conference, SSP, Kapurthala, Harkamalpreet Singh Khakh, said a case was registered under Sections 302, 379-B and 34 of the IPC at Sadar police station, Kapurthala, regarding the Ibban village murder on November 20 on the statement of eyewitness Gurvinder Singh, brother of deceased Balwinder Singh.

SSP Khakh said a major breakthrough in the case came when Khushwant Singh of Machijoa village, under Sultanpur Lodhi police station, reported a robbery at his general store in the same stolen Bolero on November 27.

In his statement, Khushwant Singh said he was sitting in his store in Sultanpur Lodhi, when four men came in a white Bolero. Three of them, heavily armed, came to his store. One of the looters who had difficulty while walking, stood outside the store. The assailants threatened the store owner and looted Rs30,000 from the store, following which they fled in the Bolero.

A case was registered under Section 379-B of the IPC and Sections 25, 54 and 59 of the Arms Act at the Sultanpur Lodhi police station on Khakh said on December 5, the police arrested four of those who conducted the robbery at Khalsa Super Store from an empty house at Naseereval village. One of the robbers who was on the roof of the house tried fleeing on seeing the police and badly injured his leg after jumping from the roof. He has been admitted to the Sultanour Lodhi Civil Hospital for treatment.

During raid at the house, the police recovered two country-made pistols (.32 bore), four magazines and 16 live cartridges. Monu and his associates confided to have committed the crime during the police investigation and Monu also admitted to murdering the surveyor.

The accused claimed they fled to Hazoor Sahib after the robbery in the stolen Bolero. During this, the Bolero was badly hit in an accident with a tipper, due to which it was dropped at Jhansi Bypass. Ranjit Singh Jitu’s left arm was seriously hurt in the accident, due to which he returned to Punjab.

The gang was trying to snatch vehicles again but were caught this time. The SSP said Monu was a hard core criminal against whom 18 cases, including that of a murder, was registered. The SSP said Monu also runs a drug business and admitted to have bought the pistols for Rs40,000 each from UP. The police said the accused would be presented to the local magistrate and following their remand, further investigation would be conducted.

What happened and how