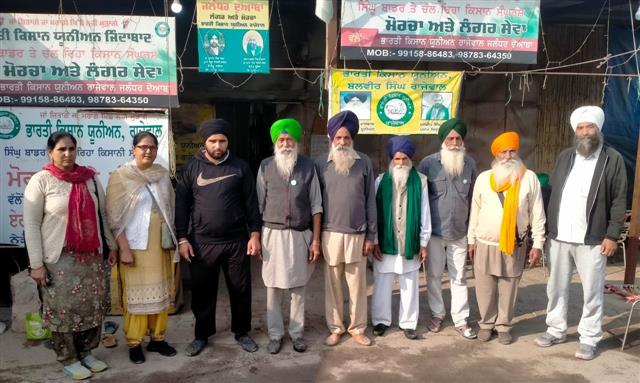 Pinde Bassi (in yellow suit), whose sister died on July 29 this year.

Four months after she lost her sister during the ongoing farmers’ protest, a Jalandhar-based woman is all set to lead a women jatha to Delhi borders. On July 29, 2021, she lost her sister Ranjit Kaur (49) days after she returned from the Delhi border protests where she had gone to participate. On the morning of November 26, ie, tomorrow — the first year anniversary of the farmers’ protest — Jalandhar resident Pinde Bassi is all set to lead a women’s morcha from Jalandhar to the Singhu border.

A resident of Gurunankpura in Jalandhar, Pinde Bassi is looking forward to the first anniversary of the Kisan Andolan which marks one-year-old fight of Punjab farmers against the three farm laws. While she is happy and triumphant over the PM’s recent announcement of the repeal of laws, she says the morcha will continue to get wholehearted support until farmers get it in writing that the laws have been repealed.

Ranjit Kaur is also survived by her husband Manjit Singh, a daughter (married in Canada) and two sons one of whom pursues a private job in Chandigarh and the second is a basketball player.

“My sister carried two households on her shoulders. Hers’ and mine. I am single. She was a huge support system to me. She had kids, an elderly mother-in-law and her husband who she took care of. Her husband also doesn’t keep well since her death. We went to the Singhu morcha on July 14. Within days, she began having pain in her legs. We consulted doctors at the morcha and near the Singhu stage but she developed fever too. So we came back on 18. While she was recuperating in Punjab, I went back to attend the Kisan Sansad at Jantar Mantar because it was important for women leaders to be present there. On July 27 onwards, my sister’s condition deteriorated again. On July 29, she died,” Bassi shares as she breaks down.

Bassi adds, “We are from a farming family. The future of our households depends on the repeal of the farm laws and the guarantee of the MSP. My sister’s life was lost during the morcha. But I haven’t stopped attending the morcha. It is imperative for our livelihoods. Earlier, I was among the few women joining the jathas from here. But in the course of the year, women have become quite aware and are joining the morcha in large numbers. Women have a huge stake in ensuring livelihoods. Our participation is very important. Tomorrow as well, women from Jalandhar, PAP, Nakodar, Jandiala and other villages near Jalandhar will be joining the jatha we are taking to Singhu.

Heading to Delhi in hordes on anniv

Farmers in hordes have began heading to Delhi borders from Doaba. While 100 farmers of the Bhartiya Kisan Union (Rajewal) headed to Singhu on Thursday, many more tractors, trolleys and vehicles are also heading on Friday and others have been going all throughout the week. Farmers from Nakodar, Daduwal, Samrawan and Jandiala are heading to join November 26 anniversary at the Delhi borders.