Since the outbreak of Covid pandemic last year, earnings of labourers have taken a big dip 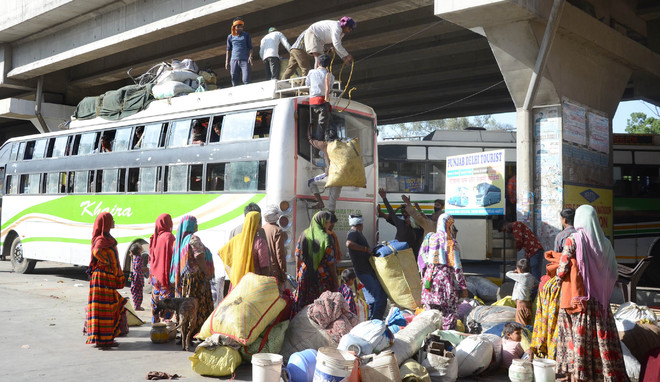 Migrants board a bus from Jalandhar to leave for their home states amid rise in Covid cases across the country. Sarabjit Singh

Pushpinder and his brothers Yash Kumar and Dimple Kumar have been working at brick kilns in Jalandhar for the past 20 years. But this year, he is keen on returning to his native village in another state.

There are over 80 brick kilns in the district with each having between 100 and 250 employees. Since the outbreak of the pandemic, labourers have been getting low wages. Some of them have already returned to their native places.

Hailing from Muzaffarnagar in UP, Pushpinder works at a kiln at Shekhupur in Jalandhar and has been trying to go back to home since April 6. He says five to six families working with him at the same brick kiln have already returned to their places, adding to his unease. Brick kiln labourers complain that they are not being paid proper wages this year. This coupled with fear of exorbitant bus fares, being charged since the lockdown was imposed last year, has left labourers on edge.

Pushpinder says: Je enni dihari ghare mil jave enni door aun da ki fayeda (If we were to get this much wages back at our native places, what is the point of coming to far-off districts like here.” We are six members here — me, my two brothers and our wives. We were paid only Rs 600 for making 1,000 bricks last year. This year we are getting Rs 730. But this is not enough. If we were to be paid as much near our native states, why should we come here. I went to the Jalandhar railway station on April 6 and 9, but there was no seat in the train. Not wanting to pay for being put on the waiting list, I came back. I will go to the station again on Friday. We can’t afford that much money for the waiting ticket nor can we afford expensive bus travel. We poor people cannot pay as much as Rs 10,000 for travelling in a bus. So, it would be better if we leave now.”

Sukhdev, who also hails from Muzzafarnagar and works at the same brick kiln, says, “Bahut aukha hai ji, sade vaste kujh nahi bachda. (Now it has become very difficult to survive and spare any money for ourselves). There are 10 members in our family. As the wages are very low, we think going back to home is a better option. Many of our fellow labourers have already left. If we try to travel by bus later, they would charge exorbitant fare.”

Sunil Kumar, a contractor who oversees four brick kilns where 200 labourers work, says, “This year will also prove to be a very tough one for labourers. I have had many requests from my labourers who are keen on returning but I am somehow holding them back. While brick kilns in Jammu are paying from Rs 900 to 950 for the same work, here they are getting Rs 730 or less. So, they want to go back and take jobs in states near their homes. Meanwhile, with partial lockdowns in Chhattisgarh and Maharashtra, labourers are getting edgy. A bus carrying 40 to 50 labourers charges around Rs 1 lakh. We have been imploring brick kiln owners to increase their wages otherwise it would be difficult for them to stay here.”

On the other hand, Northern Railway in its official statements has time and again stated that there has been “no unprecedented rush of passengers at railway stations”.