While the Phagwara Gate market observed lockdown, Mandi Fenton Ganj was bursting at the seams 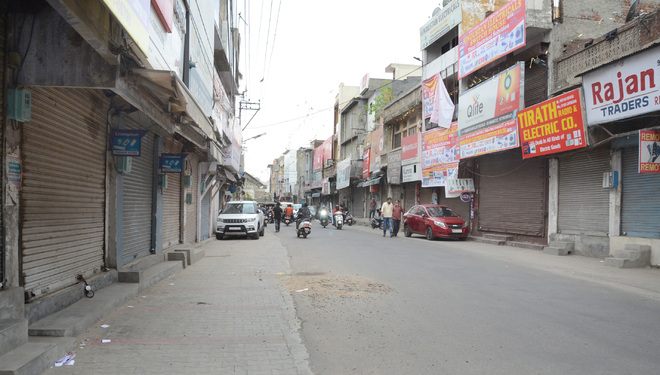 The decision of the state government to allow a certain section of traders and shopkeepers to keep functioning while ordering others to observe a mini lockdown is presenting a picture of stark contrast. This is not just causing a lot of resentment among people but also not serving the purpose of keeping Covid at bay.

The idea behind the same was to have a kind of mini lockdown wherein essential services could continue while those selling garments, footwear, cosmetics, electrical, electronic items, gift items and accessories would remain shut. Since the similar kind of shops in the city are located in one area, this has led to overcrowding in markets like Mandi Fenton Ganj where scores of shopkeepers sell grocery items in wholesale and at the same time complete lull in Phagwara Gate, where nearly 450 shops selling electrical and electronic items are lying closed for the past nearly five days.

The shopkeepers of Phagwara Gate market led by President Amit Sehgal said, “There is no point keeping some businessmen completely idle for weeks as this will only lead to frustration and loss of time and money. We need to evolve some other way to ensure that everyone is able to run business and make some regular earning and at the same time there is no crowding, panic and social distancing is properly maintained. We can restrict the working hours for public further but complete closure can have very detrimental effects for we really do not know as to how long it is going to last. Our trade is already getting affected for almost a year.”

Meanwhile, despite meetings organised with Jalandhar-1 SDM Jai Inder Singh, the rush at the Fenton Ganj market is yet to be tamed. The market, falling near railway station area, is already very congested with narrow lanes and retailers keep on making a beeline the whole day to get daily need items from the wholesalers here.

This is the seventh consecutive day when India has reported ...