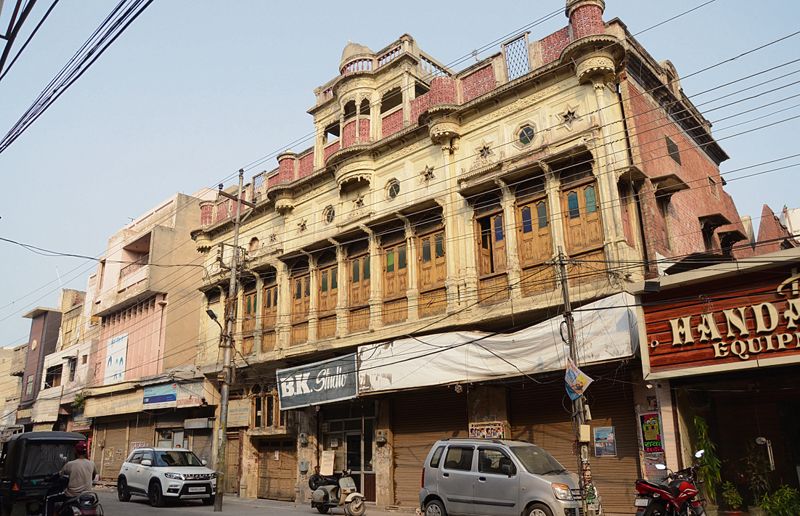 Crying for attention: A dilapidated building near Valmiki Gate in Jalandhar.

As the monsoon has advanced into Punjab, Tribune correspondent Avneet Kaur and lensman Sarabjit Singh cover city buildings that were declared unsafe a long ago, but are very much functional and pose danger during rain

WITH the onset of monsoon in various parts of the state, heavy rain is expected to lash Jalandhar over the next couple of days, raising concerns about buildings on the verge of collapsing.

Every year, fatalities due to falling of unsafe buildings or houses are reported from the city during the monsoon season, but the authorities concerned continue to remain oblivious to the issue despite the danger looming large. As per sources in the Jalandhar Municipal Corporation, in the past 15 years, just two or three surveys regarding the unsafe structures in the city had been conducted.

Moreover, if one goes by the list of unsafe buildings of the MC, the same structures which were marked years ago had been languishing. MC engineers claim several notices regarding repair or renovation of these unsafe structures have been issued to their owners and they have carried out demolition drives, the picture on the ground, however, is completely opposite.

Apart from buildings mentioned on the MC list which fall near Ram Gali, Charanjitpura, Charat Singh Bazaar, Mai Heeran Gate and Chowk Malka, there are many other unsafe buildings and houses near the Railway Road at Basti Guzan, PNT Colony, Shaheed Bhagat Singh Colony, Adda Hoshiarpur Chowk that were neither the part of the list nor in the knowledge of the officials concerned.

Besides, the building of the District Education Officer, Civil Surgeon office and the police station Division Number 2, which are visited by a number of residents and officers on a daily basis, were declared unsafe a long ago, but still the buildings are very much functional and no repair work has been carried out so far.

Earlier, in 2019, an old and unsafe water-filled tank collapsed in the Islamganj locality of the city. Even though no loss of life was reported in the incident, the abrupt flow of water and the impact of its fall caused damage to adjacent property worth lakhs - all to be blamed on the negligence of the local body and administration.

The biggest concern around these dilapidated structures is that they are in busy localities and if they fall, the city will suffer significant loss of life and property. Not just locals, but also commuters, are at risk because many of these buildings are located near or on main roads.