Man detained for trying to damage Ambedkar statue in Phillaur 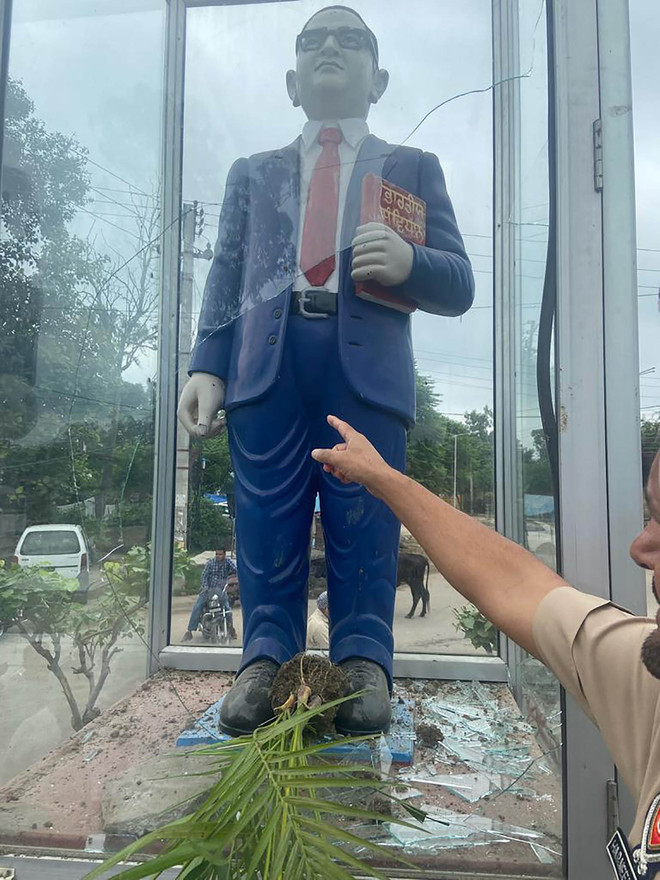 The glass cover of Dr BR Ambedkar’s statue is seen broken at Phillaur.

In a late night incident, a migrant threw inter-locking tiles and broke the glass around the statue of Dr BR Ambedkar in Phillaur. The accused has been identified as Bhiku Meena (25), a resident of Madhya Pradesh. The police have lodged an FIR under Section 295 (A) of the IPC and detained him.

Even though a press release issued on the matter mentioned that the accused had been arrested on the orders of Chief Minister Charanjit Channi, SHO Phillaur Sanjeev Kapoor said: “Technically it is not an arrest. He has been detained as he seems to be of unsound mind. We have got him admitted in a hospital and a medical board has been formed. We will decide about his arrest once the board gives us their assessment about the mental condition of the accused”.

The police officials shared that they had also gone through a CCTV footage wherein they found that the man tried to damage the statue by hitting it with inter-locking tiles around 11:30 pm. Only the frontal glass got damaged whereas the statue remained intact. The police said the footage showed that the man remained at the site for two hours after he committed the crime, seemingly unaware about the consequences of the act that he had committed.

It was in the wee hours today that the people of the area saw the damage and the police action started. Even when the man was nabbed, the police team said he just kept on murmuring that he wanted to go home. The police found that the man was not doing any job and was just feeding on whatever the passersby offered him.

Some local leaders tried to create an issue out of the matter initially saying that it was a deliberate attempt by some anti-social elements to challenge the new Dalit CM in the state. Upon being appraised of the event, the Chief Minister described it as a very unfortunate and tragic incident which has bruised the psyche of people.

Urging the people to exercise restraint, he said exemplary action would be taken against the miscreants indulging in these types of dastardly acts. Channi unequivocally said no one would be allowed to disturb the hard earned peace in the state adding that he has already directed the Director General of Police (DGP) to enhance surveillance in every nook and corner of the state.