Had ‘married her secretly’ a month ago and wanted to take her along, but her parents were against their union 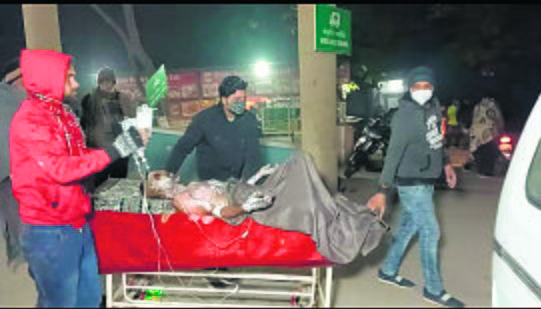 In a shocking incident reported in the city on late Wednesday night, a 30-year-old man died after ‘self-immolation’ at the doorstep of a woman’s house at Geeta Colony in the Bhargo Camp area.

In a shocking incident reported in the city on late Wednesday night, a 30-year-old man died after ‘self-immolation’ at the doorstep of a woman’s house at Geeta Colony in the Bhargo Camp area.

The man had allegedly married her secretly around a month ago and wanted to take her to his home.

While the incident came to light on Wednesday midnight, the man succumbed to his burn injuries on Thursday morning, the police said.

The deceased, Deepak Kumar Chahal, was a resident of Kashi Nagar locality of the same area. He used to work as an electrician. On the statement of his mother Kanta Devi, a case under Section 306 of the IPC (abetment of suicide) was registered against the 27-year-old woman’s family members.

Kanta Devi told the police that while Deepak was already fighting a divorce case against his first wife, he got married to the woman secretly and her parents were against this marriage.

Bhagwant Singh, SHO, Bhargo Camp, said Deepak and the woman knew each other for quite some years, however, their family members were against their marriage.

“While the deceased also shot a video of the entire incident and blamed the family members of the woman for forcing him to take such an extreme step, the woman’s family claimed that Deepak himself brought petrol to their house, sprinkled it on himself and set himself ablaze with a matchstick,” the SHO said.

With 60 per cent burn injuries, Deepak was rushed to the district Civil Hospital, where he failed to respond to the treatment and died on Thursday.

Before setting himself on fire, Deepak tried to convince the woman’s family to send her with him, however, he was allegedly intimidated by her father and her brothers. Subsequently, he poured fuel on himself and immolated self.

On the basis of the video and the statements of Deepak’s mother, a case was registered against the woman’s father and other family members.