Pedalling since Oct 14, he will complete his journey on Nov 2 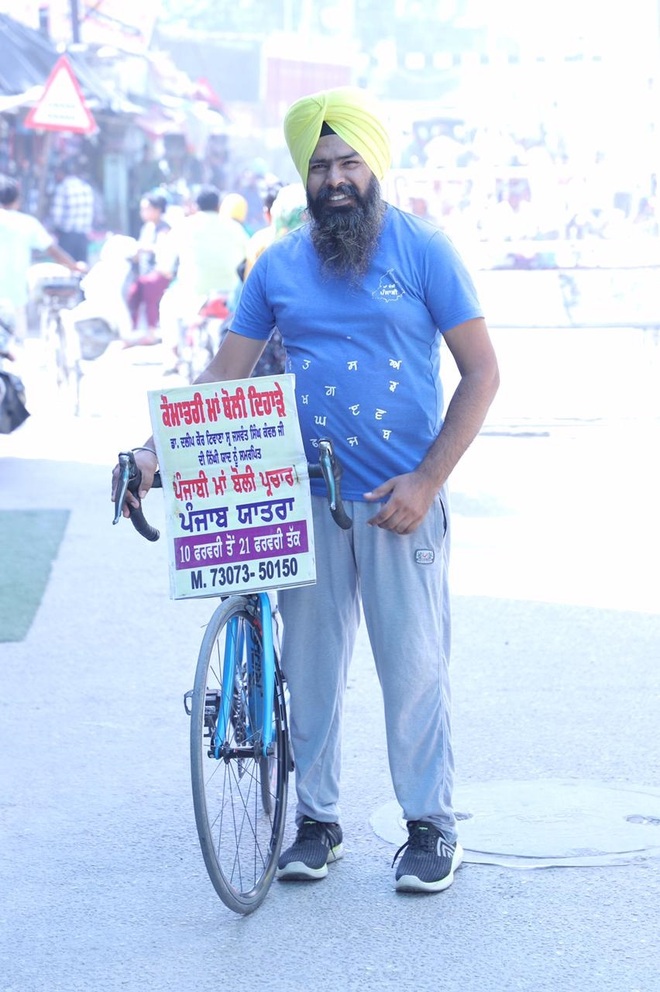 Tejinder Singh daily pedals around 130 km and visits like-minded people or associations working in the field of Punjabi literature.

On a mission to preserve Punjabi language and culture, a Mansa-based Tejinder Singh (38) reached the district today. He has been pedalling his bicycle across the state to promote the language among youngsters. During his visit to several government schools, he is also donating a wooden sculpture with engraved Punjabi alphabets.

Tejinder daily pedals around 130 kilometres and visits like-minded people or associations working in the field of Punjabi literature. He says, he launches this mission every year, however it was cancelled due to lockdown last year and he participated in the farmers protest last year.

He has so far covered around 70-80 schools and met hundreds of teachers. The Education Department today also appreciated him for his mission and assured him that the department would issue a letter to all government schools to join hands with him on his mission to propagate the Punjabi language.

While he has so far covered the entire Malwa region, he would finish his journey by November 2, that he started on October 14.

Highlighting the minor or optional status given to Punjabi in the Central Board of Secondary Education (CBSE) board affiliated schools, Tejinder stated that, in 2008, a law was passed in the state assembly mentioning it was mandatory to teach Punjabi as a subject (to students from Classes I-X), in each school of the state, failing which NOC of the the schools were withdrawn. “Hence, I urge, the state Education Department to take action against the schools, not adhering to guidelines related to Punjabi,” added Tejinder.

A postgraduate and BEd in Punjabi language, Tejinder’s mission is to cover as many regions and schools in the state to encourage the use of the language. In addition, he has been fixing placards with slogans such as ‘Punjabi meri aan hai’, meri shan hai’ and ‘Apni boli, apna maan’ at every bus stand.

Upset with the performance of board students in the Punjabi subject under the Punjab School Education Board (PSEB) and the continuous decline of Punjabi language, he had commenced a similar journey in 2019 and received tremendous support and response from the people.