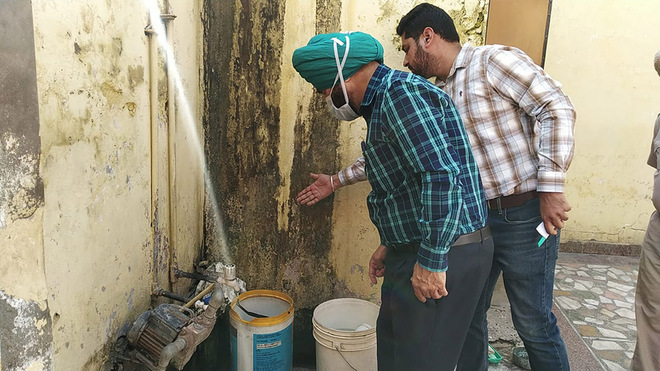 Officials of the Municipal Corporation during a checking on the premises of a house in Phagwara on Tuesday. Tribune Photo

Municipal Corporation Commissioner Charandeep Singh along with officials of the MC, Health, Water Supply Departments paid a visit to the diarrhoea-affected areas of the city for four hours on Tuesday.

He visited houses in the affected areas and interacted with residents and talked about the treatment, drinking water supply by the teams of the Health and Water Supply Departments. In his presence, eight water connections were snapped due to suspected leakage and contamination. Sewerage covers were opened to review sanitation arrangements.

The Commissioner said the Water Supply Department should check the daily supply of drinking water and ensure its supply. He asked the officials of the civic body to intensify the campaign to ensure regular fogging and safety awareness by the teams of the Health Department.

During his visit to the affected areas, he appealed to the people to take good food and use boiled water as well as ORS. He said if any person was facing any health problem, he should immediately contact the Health Department.

The Health Department maintained that cases of diarrhoea in Phagwara had started receding and the situation was under control. Out of the total 76 patients from the Pipa Rangi, Sham Nagar and Shivpuri areas admitted to hospitals due to ill-health, 66 had been discharged after recovery. Seven were undergoing treatment. Three patients had been referred to other hospitals.