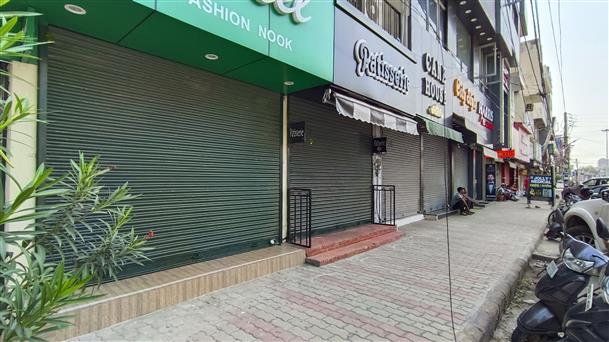 The Model Town market wears a deserted look during a protest by shopkeepers. Photo: Sarabjit Singh

Members of the Model Town Market Association on Saturday organised a protest and kept their shops closed till 12.30 pm. The shopkeepers staged a dharna on the roadside and alleged they were being made a soft target by not just the Municipal Corporation but also the civil administration and the police.

“Whenever the police teams or MC or the administration is asked to launch any challan scheme or drive against violations, they all start it from Model Town and the shopkeepers feel harassed. We do not say violations should not be checked in the market, but we insist that the drives can be started from some other areas too and officials can subsequently come to Model Town,” said Rohan Sehgal, president of the association.

Rajiv Duggal of the Mobile Association, Model Town, said: “Recently when the police were to start the sticker challan scheme, the traffic cops chose Model Town as the first spot for the drive. When the officials began to launch a drive over violations in the use of big size signages outside shops, it was again Model Town from where it all started even though there are hotels, shopping malls, etc around BMC Chowk, BSF Chowk and other market areas which are indulging in similar violations.”

Sehgal said, “Even yesterday, when the MC started a drive against shopkeepers who have not created proper parking spaces, they once again chose to initiate this campaign from Model Town. Since it is the most posh market area of the city, officials tend to believe that the impact of any drive started from here reaches far and wide and even their higher-ups appreciate their efforts. But this has started affecting the business of the Model Town shopkeepers in the midst of the festive season. The shopkeepers here are paying close to Rs 4.5 lakh as property tax every year, which is the highest in the city, and they are the ones to bear the maximum brunt”.

Association members said if officials started any drive again from Model Town next time, they would lodge a stronger protest and even block roads.