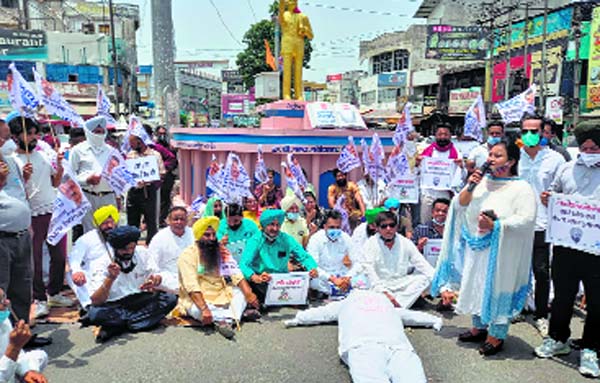 Aam Aadmi Party held a protest demonstration today under the leadership of the Assembly segment in charge Hoshiarpur and state joint secretary Brahmshankar Jimpa, against the Congress government of Punjab. The protesters shouted slogans against the Congress government and demanded a strict action against the ministers and officials involved in the post-matric scholarship scam. During this, a helpline 7827273487 was also launched for the SC-ST students, where the students can register their problems.

Addressing the protesters, Brahmpshankar Jimpa said the Education Minister was claiming of working hard for the development of the education system, while the real picture of the education system in Punjab was that more than 2 lakh SC-ST students were unable to take exams. He demanded that the Punjab government should issue a white paper on the issue of post-matric scholarship scam so that the truth of the scholarship scam could be exposed.

Jimpa said although the Punjab Government had announced to release the final installment of the post-matric scholarship for the scheduled caste students for the academic year 2020-21 but the future of the remaining three sessions was still at stake. This is because the Joint Association of Colleges (JAC) have made it clear that it will not issue roll numbers to students due to outstanding amount for the remaining years.

Brahmshankar Jimpa said the government had ruined the lives of millions of students due to the scam and because of it, many colleges in the state had refused to give roll numbers to the students. The colleges have also held certificates and degrees of the students. As a result, students have been deprived of applying for jobs. He demanded that the government should release the scholarships.