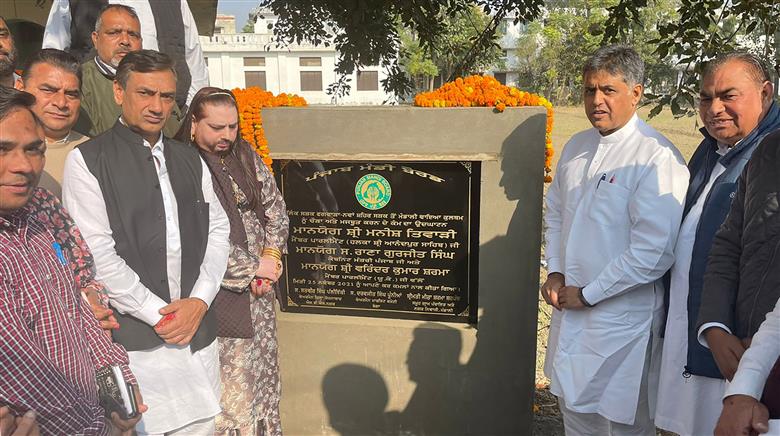 Member of Parliament Manish Tewari lays the foundation stone of widening and strengthening of 4.71-km stretch of Mandali to Kultham worth Rs2.36 crore in Banga on Thursday. Tribune photo

Lok Sabha MP Manish Tewari today inaugurated the renovation work of Banga-Garhshankar-Sri Anandpur Sahib road. The 37.73-km road is to be widened and rebuilt at a cost of 40.2 crore.

The MP said this road connects two major religious places — Sri Harmandir Sahib, Amritsar, with Sri Anandpur Sahib and Takht Sri Keshgarh Sahib and this road goes further to Mata Naina Devi. But unfortunately, despite the long-standing demand of the people, it was not redeveloped.

Before the Lok Sabha elections, ex-Akali MP Prof Prem Singh Chandumajra had laid the foundation stone of this road, but work did not begin after the elections. Tewari said he had met Union Road Transport Minister Nitin Gadkari along with PWD Minister Vijay Inder Singla, but as the Centre did not take the work forward, a proposal was made by the Punjab Government in its budget.

Hoshiarpur: Meanwhile, MLA Sundar Sham Arora inaugurated the construction work of widening road from Bassi Purani to Nara villages. The project would cost Rs 2.33 crore and the width of the road would be increased from 10 feet to 14 feet. Interlocking tiles were also being laid on the sidewalks of roads passing through residential areas so that the road would be paved and strengthened. Arora said in Hoshiarpur Assembly constituency, no shortage has been allowed especially in terms of development of villages and many more important projects were being started in villages in the near future. He said all basic amenities have been provided in the villages and now the villages of the constituency would be presented as model villages.