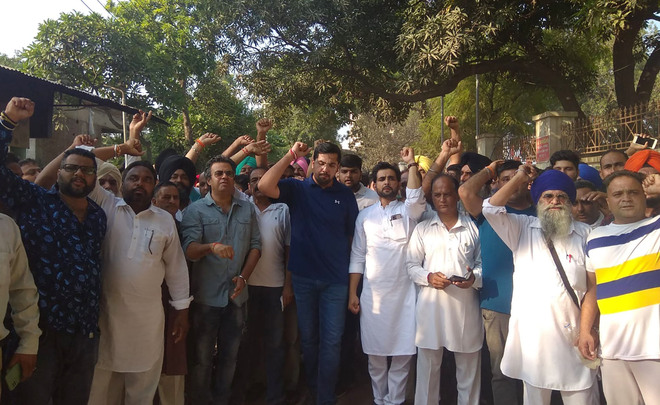 Last month, he got the brother of the worst of his political enemies as the SSP of his district. SSP Harmanbir Gill is the brother of Khadoor Sahib MP Jasbir Dimpa, with whom Angad has had bitter enmity over a property case, besides having indulged in a public fight in Amritsar over the alleged wrong conduct of Rohtak Transport Cooperative Society elections two years back.

Despite the fact that everyone in the political and bureaucratic circles has been well-aware of the fact that the two cannot see eye-to-eye, Harmanbir has been appointed as the SSP. Though it has been less than a month since he joined, Angad Saini had to come out on roads to lodge a protest against the SSP.

He and several party workers got aggressive after the district police picked Angad’s right-hand man Vikas Soni in a 2019 liquor smuggling case. Soni, an arhtiya, was picked from the grain market by a police team.

The matter pertained to the alleged smuggling of 800 cases of illegal liquor just ahead of Parliamentary elections in April 2019. A Special Investigation Team (SIT) comprising ex-SSP Nawanshahr Alka Meena, SP (Investigation) Wazir Singh Khaira and SP (Khanna) Manpreet Singh found Vikas Soni guilty and had directed the Sadar SHO to arrest Soni. It was after a massive protest and repeated phone calls that Soni was let off but asked to appear before the inquiry, whenever called.

The MLA alleges Soni’s case is not the lone matter. “Soni came on radar as he was the one who accompanied me to Amritsar to protest over the shoddy conduct of the Rohtak Transport Cooperative Society elections. President of the Rahon Nagar Council Amarjit Singh Bitta has been booked in a false case.

Son of an ex-Congress sarpanch, who is closely associated with me, got booked for illegal mining. The SSP has started picking all Congress leaders closely attached with me and started victimising them. I had written to the CM requesting him to shift Harmanbir Gill elsewhere but ultimately I had to come out on roads along with my supporters,” rues the MLA.

The MLA’s supporters alleged that the SSP was more closely associated with Angad’s political rival and ex-Nawanshahr MC chief Lalit Mohan Pathak alias Ballu, who is now halqa in-charge of Aam Aadmi Party, after quitting the Congress about two months back. They also added that the SSP had full political backing of the CM.

Asked why he thought that despite being an MLA of the ruling party he had to come out on roads to seek his transfer, Angad said: “There has been some lapse somewhere. Everyone knew that we do not get along. There possibly could be some mischief too.”

SSP Harmanbir Gill, when contacted, said: “I have no issues against Angad. Whatever property and election issues that he is talking about got resolved long back. I am only doing my duty. An inquiry against Soni was done by my predecessor and her team. My SHO just followed the orders of the SIT, over which an issue got made.”